By Her Own Standards, Nikole Hannah-Jones Should Be Fired From the New York Times

By now you’ve heard of what the New York Times did to 47-year veteran science reporter Donald McNeil. The short version is, he was on an educational trip to Peru with some 15- and 16-year-old students in 2019. During one of those teachable moments the trip was supposed to be about, McNeil “was asked at dinner by a student whether I thought a classmate of hers should have been suspended for a video she had made as a 12-year-old in which she used a racial slur. To understand what was in the video, I asked if she had called someone else the slur or whether she was rapping or quoting a book title. In asking the question, I used the slur itself.” Some students complained and the incident was investigated. He was reprimanded in some way but kept his job. That was on January 28.


The Times newsroom, which behaves more and more like a Khmer Rouge cell every day, revolted when it learned McNeil wasn’t fired. They lit their digital pitchforks and mobbed their bosses until, out of obvious and craven fear, the Times forced McNeil out last Friday. A 47-year career, gone. Completing the circle all the way to Maoism, McNeil himself penned a groveling public apology/struggle session in which he ritually denounced himself.

Frankly, no one involved has covered themselves in glory over this. It’s bad judgement all the way down.

The militants must have someone’s blood. They’re not happy unless someone else is destroyed, and even then their joy is fleeting. One of the newsroom staff who apparently led the march against McNeil was none other than Hannah Nikole-Jones, author of the infamous and disreputable 1619 Project that smears the founding of America.

Hannah-Jones is a staff reporter. She’s evidently having a toxic effect on the work culture there. Why the Times allows her to wield so much power is quite mysterious.

Former Times labor reporter Steven Greenhouse reportedly defended McNeil, writing “What ever happened to the notion of worker solidarity … to giving a fellow worker the benefit of the doubt? And why didn’t the NewsGuild do far more to defend and protect the job of a long-time Times employee, one who at times did tireless, heroic work on behalf of the Guild to help improve pay and conditions for all NYT employees?”

Deb Amlen, the Times crossword columnist, allegedly pushed back, accusing Greenhouse of putting the focus on the “perpretrator” and not on the people McNeil had “harmed.”


We’ll gloss past the question of who was actually “harmed” in this instance. That word seems to have taken on the most elastic definition imaginable.

“Greenhouse argued that the staffers who went after McNeil, including [New York Times Magazine reporter Nikole] Hannah-Jones and race reporter John Eligon, had their priorities backwards,” the Free Beacon wrote. “Many of them, he wrote in the Facebook group, were ‘far more willing to sympathize with these privileged 15- and 16-year-olds than with a long time colleague who has done much great work for the Times over the years.’”

Interesting. Even their arguments among themselves have a Marxist tinge.

Hannah-Jones went after a fellow journalist for using an offensive word despite the fact that the context clearly showed he meant no offense. The Times editors explicitly rejected the argument that context matters. Reason reported on that angle.

The New York Times on Friday forced out its lead pandemic reporter, 45-year* newsroom veteran Donald McNeil Jr., because the Grey Lady’s management, under public pressure from more than 150 employees, decided that when it comes to speaking certain radioactive words, not only does intent not matter, any utterance is potentially a one-strike offense.

“We do not tolerate racist language regardless of intent,” Times Executive Editor Dean Baquet and Managing Editor Joe Kahn explained bluntly in a memo Friday.


Well what, then, are we to make of this 2013 tweet by none other than Hannah Nikole-Jones? 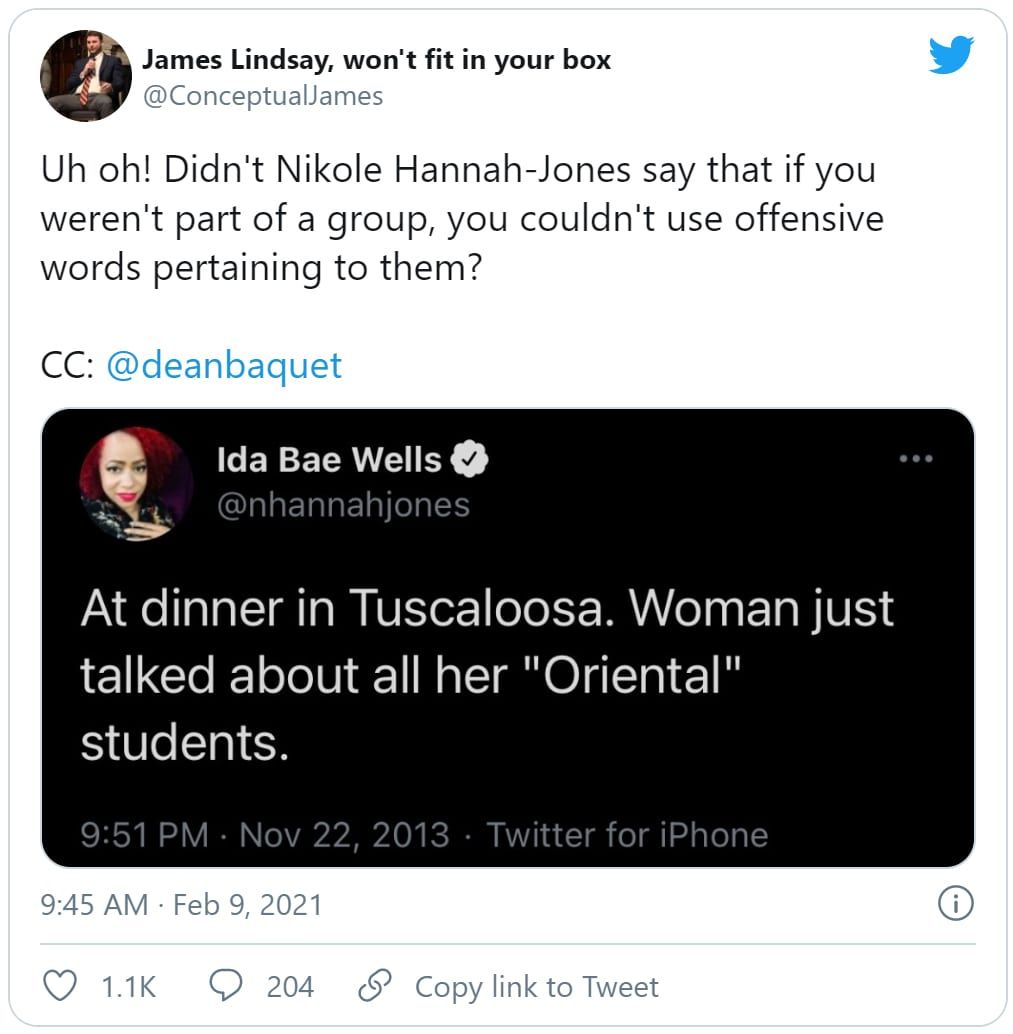 That’s racist language. The intent doesn’t matter, per Dean Baquet, who has been notified of the tweet. Why hasn’t Nikole Hannah-Jones been fired already? The template has now been set.

Frankly, this junior high-level hall monitoring and tattling bores me mad. I hated it when I was in junior high and hate it all the more now. I’d rather be writing about ideas and policies, history and the future, and of course The Mandalorian. But this is the juvenile, puerile world the Times and many in the elite coastal media seem to prefer. Too many of them flaunt their hatred for the rest of us while they’re busy distorting and omitting the news, and becoming less and less informative. Glenn Greenwald took them apart in this must-read post on Sunday. Greenwald knows whereof he speaks, of course. He was forced out of the publication he co-founded by woke militants.

This place of graceless, merciless, weaponized wrath and personal destruction is where the self-proclaimed “paper of record” that distorts “all the news that’s fit to print” has intentionally taken us as a people. They made this world. Now they should have to live in it.


*Yes, I know the “Khmer Bleu” term isn’t perfect as used here. The Khmer culture goes back centuries in Cambodia. They have a rich culture and history that includes building the magnificent Angkor Wat temple complex. But in modern times, the Khmer Rouge appropriated the cultural term, grafted communism onto it, and created one of history’s most intolerant and murderous regimes. Today’s wokes are sounding and acting more and more like the Khmer Rouge. They’re hollowing the New York Times and other media out from the inside, destroying our universities, and creating an anti-liberty culture.

LA Times Editor Has a Real Problem With Her Nice, Helpful Trump-Supporting Neighbors

When the Young Toppled the Old and Reset the Clock to Zero: ‘The Killing Fields’