'The Germans' Are Back!

‘The Germans’ Are Back!

Authored (mostly satirically) by CJ Hopkins via The Consent Factory,

Break out the Wagner, folks … the Germans are back! No, not the warm, fuzzy, pussified, peace-loving, post-war Germans … the Germans! You know the ones I mean. The “I didn’t know where the trains were going” Germans. The “I was just following orders” Germans. The other Germans. 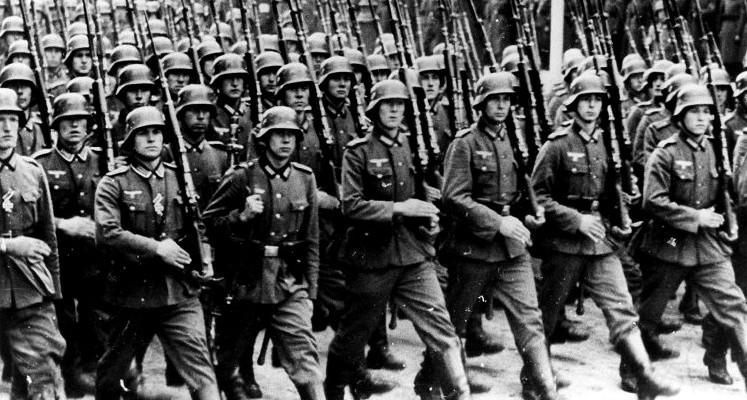 In case you missed it, on November 18, the German parliament passed a law, the so-called “Infection Protection Act” (“Das Infektionsschutzgesetz” in German) formally granting the government the authority to issue whatever edicts it wants under the guise of protecting the public health. The government has been doing this anyway — ordering lockdowns, curfews, travel bans, banning demonstrations, raiding homes and businesses, ordering everyone to wear medical masks, harassing and arresting dissidents, etc. — but now it has been “legitimized” by the Bundestag, enshrined into law, and presumably stamped with one of those intricate official stamps that German bureaucrats like to stamp things with.

Now, this “Infection Protection Act,” which was rushed through the parliament, is not in any way comparable to the “Enabling Act of 1933,” which formally granted the government the authority to issue whatever edicts it wanted under the guise of remedying the distress of the people. Yes, I realize that sounds quite similar, but, according to the government and the German media, there is no absolutely equivalence whatsoever, and anyone who suggests there is is “a far-right AfD extremist,” “a neo-Nazi conspiracy theorist,” or “an anti-vax esotericist,” or whatever.

As the Protection Act was being legitimized (i.e., the current one, not the one in 1933), tens of thousands of anti-totalitarian protesters gathered in the streets, many of them carrying copies of the Grundgesetz (i.e., the constitution of the Federal Republic of Germany), which the parliament had just abrogated. They were met by thousands of riot police, who declared the demonstration “illegal” (because many of the protesters were not wearing masks), beat up and arrestede hundreds of them, and then hosed down the rest with water cannons.

The German media — which are totally objective, and not at all like Goebbels’ Ministry of Propaganda in the Nazi era — dutifully reminded the German public that these protesters were all “Corona Deniers,” “far-right extremists,” “conspiracy theorists,” “anti-vaxxers,” “neo-Nazis,” and so on, so they probably got what they deserved. Also, a spokesperson for the Berlin police (who bear absolutely no resemblance to the Gestapo, or the Stasi, or any other notorious official-ideology-enforcing goons) pointed out that their water cannons were only being used to “irrigate” the protesters (i.e., not being aimed directly at them) because there were so many “Corona Denier” children in their ranks.

According to the government, the German media, the intelligentsia, and, basically, anyone in public life who wants to remain there, these “Corona Deniers” are becoming a problem. They are spreading baseless “conspiracy theories” that are threatening the public health and causing distress to the German people (e.g., that the vast majority of those infected suffer only mild to moderate flu symptoms or, more commonly, no symptoms at all, and that over 99.7% survive). They are walking around without medical-looking masks, which is making a mockery of the government and media’s efforts to convince the public that they are under attack by an apocalyptic plague. They are posting scientific facts on the Internet. They are staging these protests and otherwise challenging the government’s right to declare a “health emergency,” suspend the German constitution indefinitely, and rule society by decree and force.

Despite the German government and media’s efforts to demonize anyone not obediently parroting the official “New Normal” narrative as a “dangerous neo-Nazi Corona Denier,” the “Corona Denialism” movement is growing, not just in Germany, but all throughout Europe. Clearly, the time is coming for Germany to take stronger measures against this threat. The health of the Vater … uh, the nation, is at stake! Fortunately, this “Infection Protection Act” will provide the government with the authority it needs to conceive and carry out some kind of … well, you know, solution. Allowing these degenerate anti-social deviants to run around challenging the German government’s absolute power is not an option, not in a time of national health emergency! These “Nazi-sympathizing Corona Deniers” must be rooted out and dealt with, mercilessly!

I’m not privy to the details, of course, but, it being Germany, I imagine some sort of Special Task Force has been set up to efficiently deal with the “Corona Denier Problem.” Steps are clearly already being taken. Alternative media outlets are being deplatformed (because, according the media, they are “Querfront magazines”). In April, a well-known dissident lawyer was forcibly committed to a psychiatric ward (but the authorities and the media assured us that it had nothing to do with her dissident views, or with the lawsuits she was filing against the government; she just coincidentally became completely paranoid). Heavily-armed police are arresting YouTubers (although it isn’t clear exactly what for, as the authorities have released no details and the mainstream media is not reporting it).

In the run-up to the 29 August demonstration, at which the government granted some neo-Nazis de-facto permission to “storm the Reichstag,” so that the media could film it and discredit the real protest, one German politician went so far as to call for “Corona Deniers” to be deported … presumably on trains, somewhere to the east.

But seriously, I don’t mean to pick on the Germans. I love the Germans. I live in Germany. And they’re hardly the only ones implementing the new pathologized totalitarianism.

It’s just that, given their not-too-distant history, it is rather depressing, and more than a little frightening, to watch as Germany is once again transformed into a totalitarian state, where the police are hunting down the mask-less on the streets, raiding restaurants, bars, and people’s homes, where goose-stepping little Good German citizens are peering into the windows of Yoga studios to see if they are violating “social distancing rules,” where I can’t take a walk or shop for groceries without being surrounded by hostile, glaring, sometimes verbally-abusive Germans, who are infuriated that I’m not wearing a mask, and otherwise mindlessly following orders, and who robotically remind me, “Es ist Pflicht! Es ist Pflicht!” 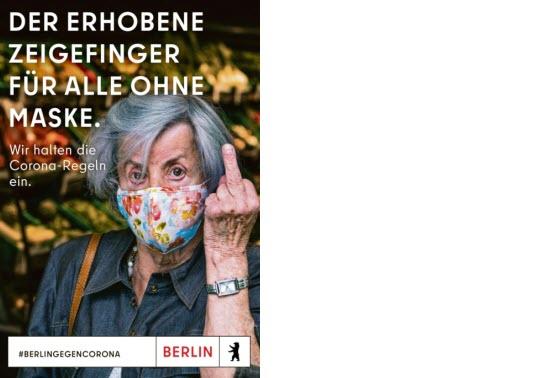 Yes, I am fully aware that it is “Pflicht.” If I had any doubt as to whether it was “Pflicht,” the Berlin Senat cleared that up when they commissioned and ran this charming advert instructing me to fuck myself if I don’t want to follow their “Corona orders” and profess my belief in their new Big Lie.

And OK, before the Literalist Society starts flooding me with outraged emails, no, I’m not calling these Germans “Nazis.” I am calling them “totalitarians.” Which, at this point, given everything we know, if you’re still pretending that this coronavirus in any way warrants the increasingly ridiculous “emergency measures” we are being subjected to, I’m sorry, but that is what you are.

You may not believe that is what you are … totalitarians never do, not until it is far too late.

It functions like a cult, totalitarianism. It creeps up on you, little by little, little lie by little lie, accommodation by accommodation, rationalization by rationalization … until one day you find yourself taking orders from some twisted little narcissistic nihilist on a mission to remake the entire world. You don’t surrender to it all at once. You do it over the course of weeks and months. Imperceptibly, it becomes your reality.

You do not recognize that you are in it, because everything you see is part of it, and everyone you know is in it … except for the others, who are not part of it. The “deniers.” The “deviants.” The “foreigners.” The “strangers.” The “Covidiots.” The “virus spreaders.”

See, although the narratives and symbols may change, totalitarianism is totalitarianism. It doesn’t really matter which uniform it wears, or which language it speaks … it is the same abomination. It is an idol, a simulacrum of the hubris of man, formed from the clay of the minds of the masses by megalomaniacal spiritual cripples who want to exterminate what they cannot control. And what they want to control is always everything. Everything that reminds them of their weakness and their shame. You. Me. Society. The world. Laughter. Love. Honor. Faith. The past. The future. Life. Death. Everything that will not obey them.

Unfortunately, once this kind of thing gets started, and reaches the stage we are currently experiencing, more often than not, it does not stop, not until cities lie in ruins or fields are littered with human skulls. It might us take ten or twelve years to get there, but, make no mistake, that’s where we’re headed, where totalitarianism is always headed … if you don’t believe me, just ask the Germans.