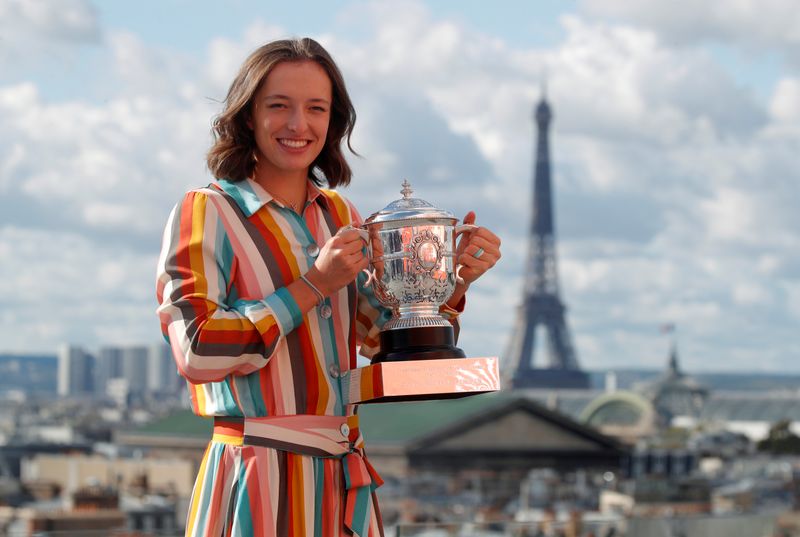 LONDON (Reuters) – If a graphic example were needed of the internal psychological warfare tennis players often wage in their own minds, the first hour of Dominic Thiem’s U.S. Open final against Alexander Zverev would be a good place to start.

Stifled by nerves and stress, the dazed Austrian stylist looked as though his feet were trapped in cement and he was wielding a tree trunk rather than a tennis racket.

Remarkably, having lost the opening two sets, he shed the mental demons in the nick of time to come back and win a nerve-jangling final in which Zverev finally buckled under pressure.

It was exhausting just watching Thiem finally crawl over the line to a maiden Grand Slam title.

A few weeks later in Paris, Poland’s 19-year-old Iga Swiatek made the same life-changing breakthrough look as demanding as a stroll in the park as she breezed past Sofia Kenin.

Swiatek free-wheeled her way to becoming the youngest French Open women’s winner for 28 years, going through the fortnight without dropping a set.

The contrast between her victory and Thiem’s was stark, although both were equally admirable.

Tennis, with it’s scoring system, thinking time and technical difficulty, is arguably the most psychological of all sports. Which is why Swiatek’s mastery of her mind stood out.

“I don’t think it’s possible to become a champion without understanding the psychology of tennis because it’s an unusual sport,” Swiatek told Reuters.

“We’re all alone and we have so much time to think, so many chances to get unfocused. At the highest level everybody can play good tennis, have good tactics and technique but there are only a few who are mentally ready to be a champion.”

In his acclaimed book The Inner Game of Tennis, Timothy Gallwey spoke of players “fighting their own mind” at crucial moments, of trying “too hard”.

Swiatek, while insisting she is not especially interested in what’s going on between her ears, regards herself lucky to have sports psychologist Daria Abramowicz in her camp.

Counter-intuitive perhaps, but Abramowicz taught Swiatek to walk on court with a laissez faire approach to her matches.

“She explained to me that I can’t really play well if I’m just thinking about if I’m going to win or not,” Swiatek said.

“She explained it to me hundreds of times. Right before French Open I just wasn’t feeling really good on court and I decided that okay, I’m going to give it a try.

“I think that was the first moment I fully trusted that I don’t need expectations and I can just play my tennis and don’t care if I’m going to win or lose.”

Abramowicz describes Swiatek’s ability to process her thoughts in the heat of battle as “unique”.

“Iga really likes and needs to understand the process and a lot of mechanisms and keys on how to achieve a high-quality performance, how to manage stress,” Abramowicz says.

“She is very open minded which is actually another great quality of her.”

While there is no doubt that greats Roger Federer, Novak Djokovic, Rafa Nadal and Serena Williams boast personalities that help them churn out Grand Slam titles, Abramowicz insists the brain, like a forehand, can be trained.

“A winner’s mentality is not just fully dependent on personality,” she said. “You can create great routines, you can double up this mindful attitude and this is kind of the foundation an athlete or team can build winner’s mentality.”

With fine margins between any player in the top 100 these days — nearly 30% of WTA players say they have targeted the mental aspect during the COVID-19 lockdowns, according to a recent survey https://www.wtatennis.com/news/1857820/wta-teams-up-with-sap-and-qualtrics-to-discover-player-insights-and-motivations-surrounding-2020-return-to-play conducted by Qualtrics, an SAP company.

Swiatek believes it is something that will help her withstand the pressure of now being a target, as is the fact coach Piotr Sierzputowski encourages her think for herself.

“He’s not saying do this, do that,” she said. “He shows me a few ways and I have to choose which one is the best for my tennis and for my opponent, to win.”

On the evidence so far, she is choosing right.