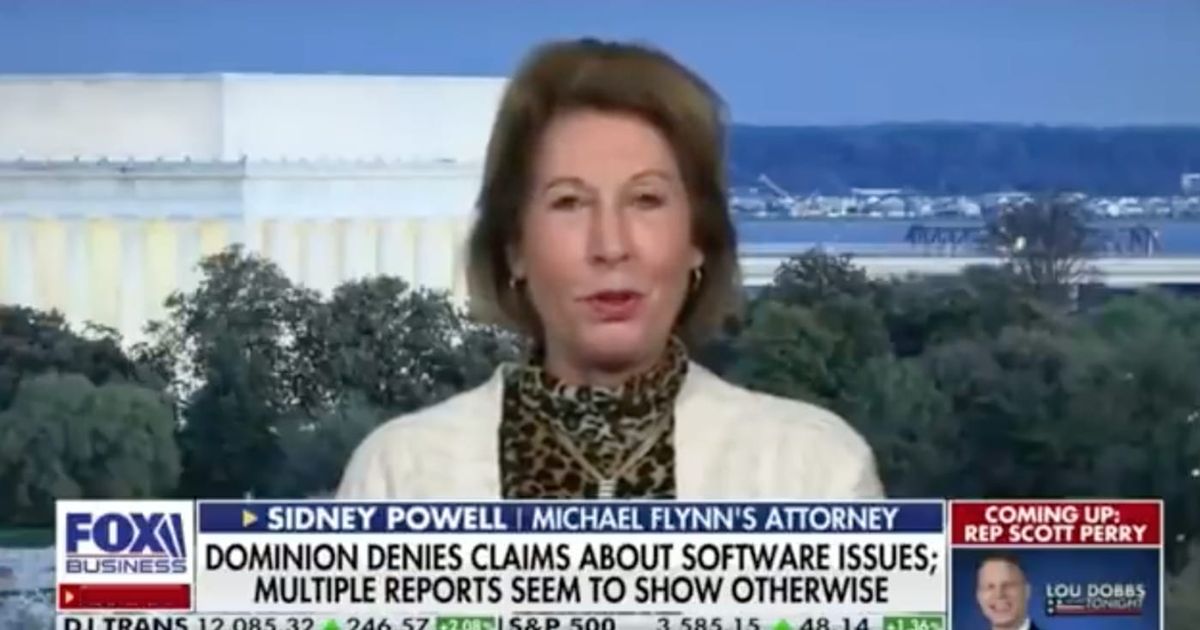 Attorney Sidney Powell is not a crack pot, a nut, or a fraud. The distinguished and tireless lawyer who is General Michael Flynn’s attorney, and who has rooted out government malfeasance and criminality before, has become convinced that there was widespread fraud in the 2020 election and she “can’t wait” to prove the voting machines used are at fault.

President Trump won this election in a landslide. It’s going to be irrefutable. Patriots are coming forward everyday, all day, faster than we can collect their information with testimony they’re willing to give under oath about how their votes were stolen and how the machines operated.

I can hardly wait to put forth all the evidence that we have collected on Dominion, starting with the fact that it was created to produce altered voting results in Venezuela for Hugo Chavez and then shift internationally to manipulate votes for purchase in other countries, including this one.

It was funded by money from Venezuela and Cuba and China has a role in it also, so if you want to talk about foreign election interference we certainly have it now. We have staggering statistical evidence, we have staggering testimony from witnesses including one who was personally in briefings when all this was discussed and planned beginning with Hugo Chavez and how it was designed there. Then saw it happening in this country.

She is persuaded that in every single state that inexplicably stopped counting votes on election night that Dominion machines were “updated.”

As soon as the states shut down on election night and stopped counting? Those were the states where the most egregious problems occurred.

[…] They were updated the night of the election sometime after the election. We have statistical evidence showing hundreds of thousands of votes just put in and replicated. … There needs to be a massive criminal investigation and it’s going to affect millions of voters and elections.

Dominion denies any problems with its machine. USA Today reports that the Department of Homeland Security’s elections experts, which Powell disdainfully says “should have been fired yesterday,” say this was the “most secure in American history.”

[T]he security group — which includes the Department of Homeland Security’s Cybersecurity and Infrastructure Security Agency and the National Association of State Election Directors — described the election as “the most secure in American history.”

“There is no evidence that any voting system deleted or lost votes, changed votes, or was in any way compromised,” the coalition concluded.

Discussion of such things are often relegated by Democrats in and out of the media to black helicopter crazy talk — except when they thought it happened to Democrats in the 2004 election.  They were convinced that Diebold voting machines malfunctioned or were programmed to swing votes to President Bush.


The brilliant Christopher Hitchens wrote in Vanity Fair in 2006, “No conspiracy theorist, and no fan of John Kerry’s, the author nevertheless found the Ohio polling results impossible to swallow: Given what happened in that key state on Election Day 2004, both democracy and common sense cry out for a court-ordered inspection of its new voting machines.”

Harpers agreed, reporting, with many other legitimate news sources, that something weird happened in Ohio in 2004.

The spread of computerized voting has carried with it an enormous potential for electronic skulduggery. In 2003, Bev Harris, a citizen sleuth and the author of Black Box Voting: Ballot Tampering in the 21st Century, made a shocking and game-changing discovery: Diebold, then one of the primary manufacturers of voting machines, had left the 40,000 files that made up its Global Election Management System (GEMS) on a publicly accessible website, entirely unprotected. Diebold was never able to explain how its proprietary tabulation program ended up in such an exposed position. Harris downloaded the files, and programmers worldwide pounced, probing the code for weaknesses. “The wall of secrecy,” said Harris, “began to crumble.”

The people who helped bring you the Trump-is-a-Russian-secret-agent story, Mother Jones, were all-in on the supposed Diebold debacle. Wired reported widespread bad management of the election in the notorious Cuyahoga County with machines that were turned off.


USA Today reports that DHS says a recount can be performed because there is a paper trail with the machines in question.

It added that all states with close results have paper records of each vote that allow for a recount, if necessary.

“This is an added benefit for security and resilience,” the coalition wrote. “This process allows for the identification and correction of any mistakes or errors.”

Powell says she’s got a paper trail of her own: affidavits from witnesses who swear there was fraud.

This is essentially a new American revolution. And anyone who wants this country to remain free needs to step up right now. These are federal felonies. Altering a vote or changing a ballot is felony. People need to come forward now and get on the right side of this issue, report the fraud they know existed in the Dominion voting system because that’s what it was created to do. It was its sole, original purpose. It has been used all over the world to defy the will of people who wanted freedom.

Powell says she soon will “release the Kraken.”

See her remarks below.


WHAT THE HELL? Report Claims Durham Is Dropping the Spygate Investigation

Hypocrisy Unmasked: Gov. Gavin Newsom Breaks Own COVID Rules to Party With Lobbyist. And It Gets Worse