Protesters against COVID-19 restrictions clash with police in Spanish cities 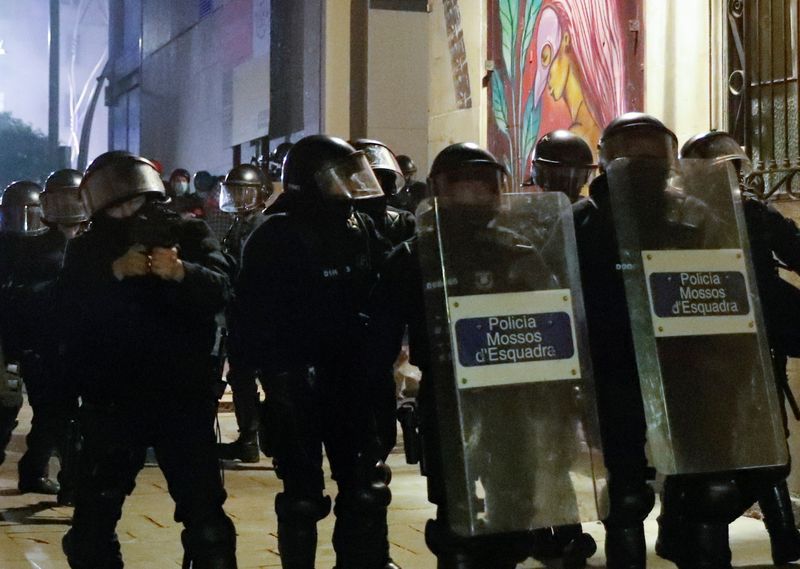 Policemen disperse demonstrators during a protest against the closure of bars and gyms, amidst the coronavirus disease (COVID-19) outbreak, in Barcelona, Spain October 31, 2020. REUTERS/Nacho Doce

MADRID (Reuters) – Spain’s prime minister on Saturday condemned a series of violent protests in cities across the country against restrictions imposed to curb the surge of COVID-19 after a six-month state of emergency came into action this week.

Protesters pelted police with rocks and other projectiles in Barcelona in a second night of disturbances in Spain’s second-largest city.

In the northern Spanish city of Logroño, about 150 people attacked police with stones, set fire to containers and looted shops, police reported. Riot police were drafted in to quell disturbances in Haro, in the wine-growing region of La Rioja.

Prime Minister Pedro Sanchez tweeted: “Only from responsibility, unity and sacrifice will we be able to defeat the pandemic that is devastating all countries. Violent and irrational behavior by minority groups is intolerable. It is not the way.”

On Friday, about 50 demonstrators attacked police with stones in Barcelona, set rubbish containers on fire and looted shops. Fourteen people were arrested and 30 injured.

Earlier, local police said about 1,500 hotel and restaurant workers took part in a peaceful demonstration against restrictions imposed under the state of emergency which they claim will threaten their jobs. All bars and restaurants have been closed in the Spanish region of Catalonia, which includes Barcelona, until Nov. 13.

Similar disturbances happened in the cities of Burgos, Vitoria, Santander, Valencia and Zaragoza on Friday.

Spain, one of the hardest-hit countries by COVID-19, imposed a state of emergency until early May this week, giving regions legal backing to decide curfews and restrict travel to try halt the rise of coronavirus infections.

Like other European countries, Spain has resorted to increasingly drastic measures to curb infections, although less stringent than those adopted by Germany or France.