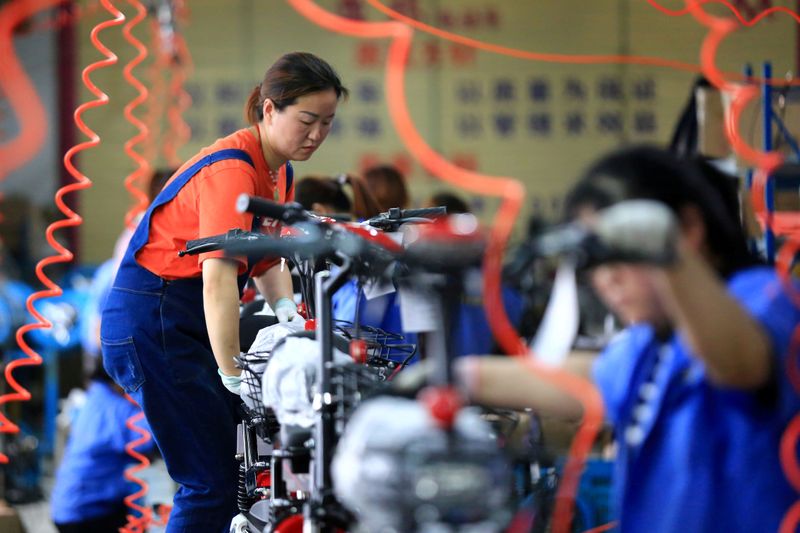 BEIJING (Reuters) – China’s factory activity expanded at a slightly slower pace in October but was slightly above analysts’ expectations, suggesting a continuing economic recovery as the country rebounds from the coronavirus shock.

The official manufacturing Purchasing Manager’s Index (PMI) fell to 51.4 in October from 51.5 in September, data from the National Bureau of Statistics showed on Saturday, remaining above the 50-point mark that separates growth from contraction.

Analysts had expected it to slip slightly to 51.3 but said a broader recovery still appeared to be solidly on track.

China’s vast industrial sector is steadily returning to the levels seen before the pandemic paralysed huge swathes of the economy.

Pent-up demand, stimulus-driven infrastructure expansion and surprisingly resilient exports are propelling the rebound, though the global outlook is dimming as many Western countries battle renewed surges in the virus that causes COVID-19, with some going back into virus lockdowns.

The official PMI, which largely focuses on big and state-owned firms, showed overall new orders remained steady at 52.8, while new export orders rose to 51.0, improving from 50.8 a month earlier.

But smaller firms continued to struggle. A sub-index for those companies stood at 49.4 in October, slipping back into contraction from September’s 50.1.

Companies also continued to shed jobs, and at a faster pace. A sub-index for employment fell to 49.3 from September’s 49.6.

China’s economy grew a weaker-than-expected 4.9% in the third quarter year-on-year. It is expected to expand around 2% for the full year – the weakest in over three decades but still much stronger than other major economies.

The pandemic has been largely controlled in China, with daily life in much of the country returning to normal, although an outbreak emerged recently in the western region of Xinjiang.

A sister survey on the services sector showed activity expanded for the eighth straight month, hitting the highest level since October 2013, as the removal of restrictions on public gatherings and movement bolstered consumer demand.