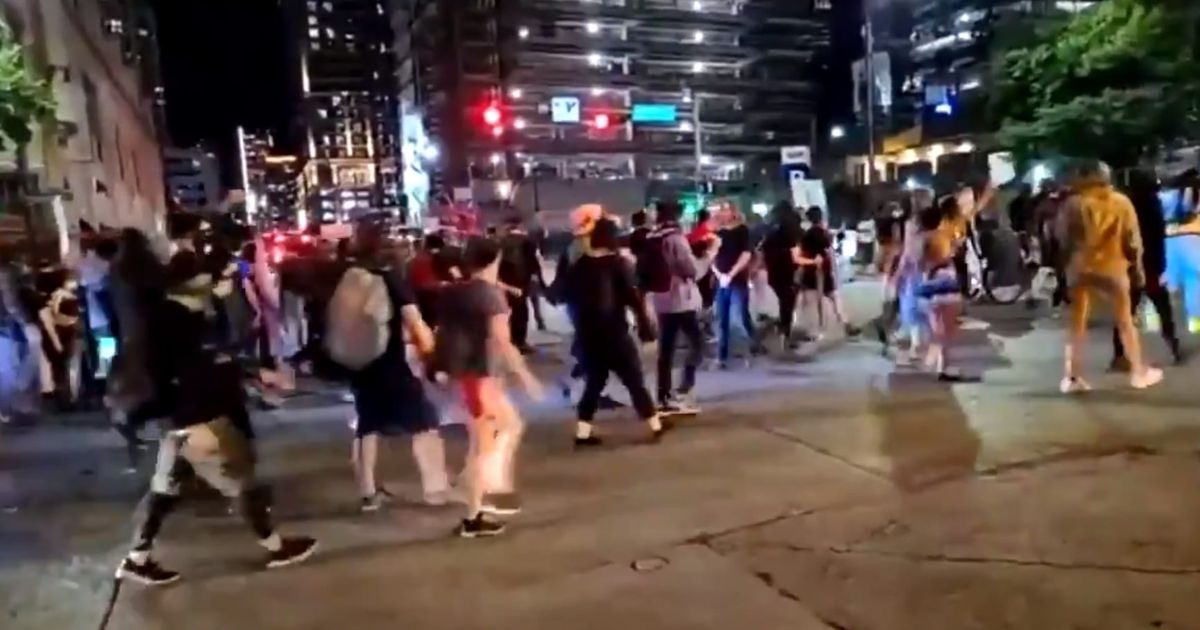 Late Saturday night, downtown Austin, Texas was the scene of protest and counter-protest. Antifa protested, anti-mask people protested, and at about 9:50 PM, a car approached a march around 4th and 6th Streets and Congress Ave.


Congress Ave. is the city’s main downtown north and south artery. Sixth Street is Austin’s famed bar and live music drag and that area is Austin’s major downtown entertainment district. Some downtown bars and restaurants have reopened in recent weeks, though all are struggling with the pandemic restrictions and the protests sometimes making it all but impossible to conduct normal business.

Clip of the shooting at the protest in Austin Texas from Hiram Gilberto on FB pic.twitter.com/VFbzqfoSff

One witness says the car “sped” toward the protesters, according to the Austin American-Statesman.

According to a witness, the incident began when the driver on Fourth Street honked, turned right and sped down Congress, driving through the crowd. He appeared to hit an orange barrier in the road and came to a stop, said Michael Capochiano, who attended the protest.

“There were people around the car, yelling, and people sounding like they were frightened,” Capochiano said.

A protester with a rifle approached the car, and the driver pointed his gun outside the window, Capochiano said. The driver fired several shots, then sped away, he said.

The man with the rifle “dropped to the ground when he got shot,” Capochiano said.

If this was a typical Austin protest, it did not have a permit and any blocking of streets was not sanctioned. Protesters have tended to take over streets on their own, preventing residents and visitors who have nothing to do with the protests from accessing streets or the businesses on them. Protests have turned violent and devolved into the looting of downtown businesses once or twice in recent weeks. Protesters have damaged the state capitol and attacked a black Department of Public Safety officer, hurling racist insults at him.


According to a source with knowledge of the events that transpired Saturday night, the protesters surrounded the wrong car. The driver was armed, as is legal in Texas, and fired when the man with the rifle approached the driver’s car and pointed his gun at the car window.

The driver was detained and according to APD, is cooperating with police.

It’s early in the investigation, so more facts may come to light.

Over the past several weeks, lawlessness has noticeably increased while Mayor Adler and the city council insist on handing the city over to the protesters and defunding the police.

In early June, things seemed to take a positive turn in the city when APD officers put their bodies on the line to protect protesters from a truck that was suspected of carrying explosives and was barreling toward the protesters.

But that was when the protests were still about the death of George Floyd at the hands of now-former Minneapolis police officer Derek Chauvin. Those peaceful protests ended long ago. Chauvin faces numerous criminal charges. Antifa has taken over the protests in recent weeks.

The protests in Austin have continued, though the number of protesters had consistently shrunk down to just two or three dozen in the city of more than 988,000 residents, and 2,000,000 in its metro area. The protests can still turn violent at any moment, block off a street, smash windows and loot stores. All of this has happened in Austin in recent weeks as small bands of rioters turn Austin’s streets violent and dangerous. Many Austinites and those who live in surrounding communities now carry a firearm on them for self-defense any time they venture downtown.


On June 19, the remaining protesters — smaller in number, but angrier and more prone to violence — attempted to storm Austin police headquarters. Mayor Jacob Frey in Minneapolis and Mayor Jenny Durkan in Seattle have both allowed protesters to take over police precincts, with disastrous results. In Minneapolis, protesters burned the precinct to the ground. In Seattle, thanks to Durkan’s decisions, protesters took over several downtown blocks and turned them into a segregationist, secessionist collective —  and several died in shootings there as there was no police presence.

When Austin’s protesters failed to take over Austin police headquarters on June 19, they pulled down the Texas and American flags flying outside police headquarters and burned them. Police later arrested 20-year-old Julian Gawel of Florida, a student at the University of Texas at Austin. UT classes had closed in March due to the coronavirus pandemic. Because he may have crossed state lines, his case was turned over to the FBI.

On the night of June 27, a nightmare scenario played out. Protesters illegally blocked off a street with Lime scooters they had stolen.

They surrounded a man who was trying to drive past — which meant through — the flash mob which was illegally blocking the street. The driver reached into his glove box and pulled out a handgun which he waved at the mob.


He was able to pass through safely and then turned himself in to police. Police used pepper spray to control that crowd and arrested seven. The driver was later released.

Since that time, Austin has cut funding to police. Far-left activist groups are pushing for far more cuts, to slash more than half of the police department budget. Media in the city are playing along with the far-left activists, failing even to report their political leanings.

Media are also failing to report the likely consequences of deep cuts to the police budget.

In June, Austin saw 138 aggravated assault crimes, including shootings and stabbings according to the Austin Police Association. Homicide is on the rise. There have been three just in the past ten days. But APD has just 9 detectives to handle this caseload. The city council has voted to cut 100 police positions and delay the next cadet class.

Austin has already seen 27 homicides in 2020, including the gruesome murder of Karen Sue Hansen, a well-known advocate for the homeless in Austin. An arrest has been made in that case.

The city council gave overtime pay to many civilian city employees for working during the pandemic, but specifically left out first responders. Fire department, EMS and police personnel did not get overtime pay despite the fact that many of them have been working out on the front lines, often clocking 60 and 80 hour work weeks, during both the protests and the pandemic.


Travis County voters handed victories to two Democratic candidates in the primaries who had campaigned for halting prosecutions of low-level crimes, and in favor of taking every police shooting to a grand jury whether the facts merit it or not. Delia Garza, currently on the city council but soon to be the Travis County attorney, announced that she would drop all charges against protesters. Garza won the Democratic primary run-off there is no Republican on the November ballot.

UPDATE: The man who was killed has been identified as Garrett Foster. This appears to be him, in a video interview taken before the protest Saturday night. The man in this video says he is carrying an AK-47 rifle, the butt of which can be seen in the frame. He claims those who oppose protests are “too big of pussies to stop and actually do anything about it.” He also says that if he were to use his AK-47 against the police, “I’m dead.”

His mother has appeared on television Sunday morning, claiming he was merely pushing his wife along the march in her wheelchair when he was shot, and did not mention the rifle.

Garrett Foster, the Black Lives Matter supporter who was shot and killed tonight in Austin, TX, was interviewed with his AK47.