The Black Republican whose interracial marriage was slammed in a rant by an Ayanna Pressley supporter says she’s still looking for an apology from the congresswoman — but hasn’t gotten much yet. 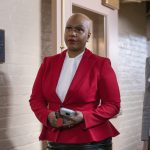 “I haven’t heard a single world from the Pressley campaign,” Rayla Campbell said Wednesday. “You need to stand up because this is racism at its core — bigotry at its core.”

In a video that went viral over the weekend, Roxbury community activist Monica Cannon-Grant repeatedly called Campbell a “heifer” and made frequent crude references to Campbell’s white husband.

Rollins on Tuesday disavowed Cannon-Grant’s video, saying it’s inappropriate to go after someone’s family like that.

Campbell, a Randolph Republican, said that people in her native Scituate had reached out to her in support after the Herald reported on the video on Tuesday after the blog Turtleboy publicized Cannon-Grant’s video over the weekend. Campbell, who’s running a write-in campaign to try to get on the November ballot against Pressley, said she and her family continue to keep away from their home out of fear after the video.

Cannon-Grant didn’t respond to a request for comment. In a post on Monday, the anti-violence community activist wrote, “I do wish I had been more careful with my words.”

Visit the Boston Herald at www.bostonherald.com