Portland Activist Calls for ‘Abolition’ of the United States 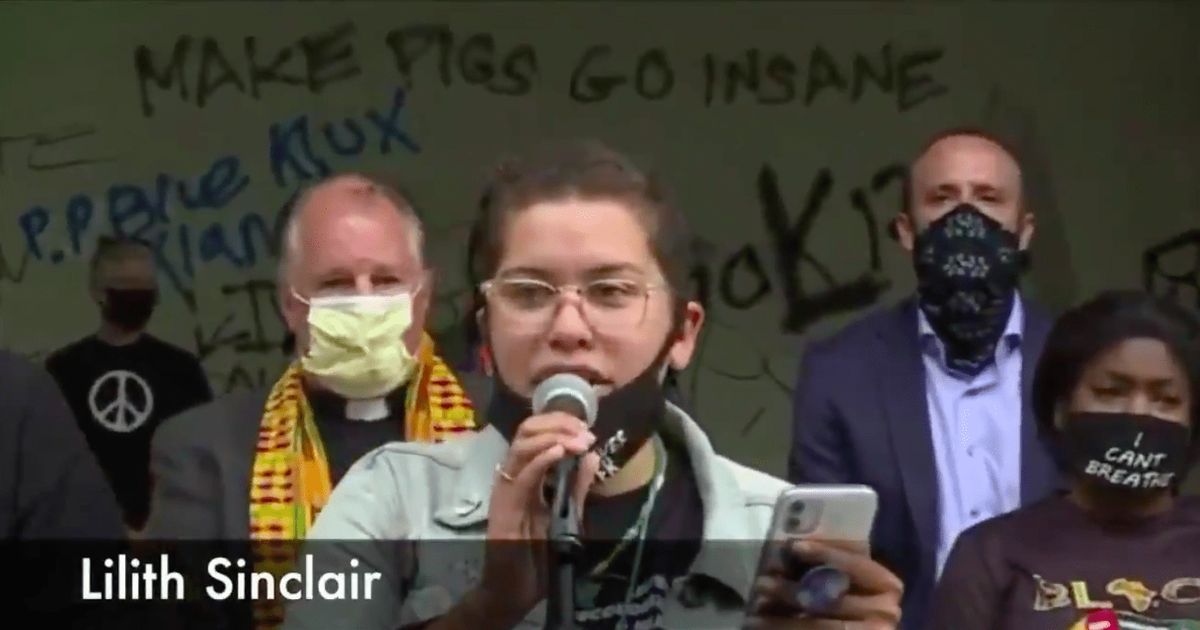 On Friday, before the fiftieth night of violent antifa riots, a protester who identified herself as an “Afro-Indigenous non-binary local organizer” declared that she is advocating for the abolition of “the United States as we know it.” This brief declaration arguably encapsulates the destructive spirit of antifa and the impetus behind the violent riots that have ravaged the streets of Portland.


“My name is Lilith Sinclair, I’m an Afro-Indigenous non-binary local organizer here in Portland, organizing for the abolition of not just the militarized police state but also the United States as we know it,” Sinclair declares in a brief video that went viral on Twitter. She also called Portland “stolen land,” proceeding to give Native Americans a “land acknowledgment.” By the way, she also identifies herself as a “sex worker,” i.e. a prostitute.

By “Afro-Indigenous,” Sinclair likely means she has black and Native American ancestors. By “non-binary,” she insists that she does not fall into the binary understanding of biological sex as male or female. In an interview with the Portland Mercury last month, Sinclair argued that Americans have to deconstruct the “colonized thought” that white oppressors supposedly foisted upon racial minorities.

“We’ve been working to heal these intergenerational wounds of colonization and genocide for generations. But there’s still a lot of work to undo the harm of colonized thought that has been pushed onto Black and indigenous communities,” Sinclair told the newspaper. “That’s in regards to Christianity, and in regards to all of these different types of oppressive systems that have introduced and enforced the gender binary on communities that did not ascribe to that way of thinking, including indigenous communities both Native American and across Africa.”

She spoke about “coming out” as non-binary, saying it involved “unlearning the harm through colonization that I’ve been introduced to, but also about making space for our elders who have been fighting the fight for a long time, to try to teach them to see past the colonization path as well. My gender journey took being surrounded by a lot of other Black trans and nonbinary revolutionaries who really helped me unlearn cultural expectations, and the forced performed femininity that’s expected in sex work.”

Sinclair’s call to abolish “the United States as we know it” is not just a fluke of one speech she gave in Portland. Last month, she told the Mercury, “I work on abolitionist principles because I know the United States was founded on genocide. I know that there is clearly no respect for the sanctity of human life.” She argued that America’s involvement in foreign countries “is not leadership—it’s imperialism and neocolonialism dressed up in a way to make people forget the genocide.”

She concluded by celebrating the Stonewall Riots in 1969, now celebrated in June (designated “Pride month”) as the beginning of the LGBT movement. “I think it’s apt that we are looking at a global uprising against oppressive structures during the month where we celebrate the anniversary of another uprising—another movement to not just ask for but to demand our rights,” she said.


Sinclair believes that white “oppression” is so ingrained in the minds and attitudes of supposedly oppressed people that they have to “unlearn” the “colonized thought” of Christianity and the “gender binary” — which is rooted in the scientific binary of biological sex. She seems to believe that certain “cultural expectations” rooted in the “genocide” upon which America was founded have brainwashed her and she needs to unlearn basic truths like the fact that people are male or female.

This comes from Marxist critical theory, which analyzes the world in terms of power and oppression. The evils perpetrated against both black slaves and Native Americans supposedly sully the entire American project, which must be uprooted in order for people to be truly free.

This is nonsense. While black people and Native Americans struggle with various pathologies, American society has taken great strides to level the playing field and ensure equal opportunities. The system is not perfect, but it is not rooted in preserving slavery and genocide.

Yet Sinclair believes this because so many powerful institutions teach it. Just last month, the Smithsonian’s National Museum of African American History and Culture (NMAAHC) released a horrifying Marxist lesson on whiteness that “deconstructed” various aspects of American and Western culture, including capitalism, science, the nuclear family, and Christianity, as nefarious relics of white supremacy. The lesson also claims that a work ethic, delayed gratification, being polite, and getting to meetings on time are aspects of the “whiteness” culture that must be deconstructed and rejected.


To call this “throwing the baby out with the bathwater” would be an understatement. In fact, nefarious teachings like this actually encourage black people to reject basic standards of hard work, delayed gratification, politeness, and timeliness that are essential for getting ahead in a free-market society — or almost any society, for that matter.

This experiment in Marxist critical theory also emerges in The New York Times‘s “1619 Project,” which claims that America’s true founding came in 1619 with the arrival of the first slaves, rather than in 1776 with the Declaration of Independence. On this theory, every aspect of American society must be examined and uprooted in the interest of “racial justice.”

When vandals toppled a statue of George Washington in Portland, they spray-painted “1619” on the statue. When Claremont’s Charles Kesler wrote in The New York Post, “Call them the 1619 riots,” the project’s founder, Nikole Hannah-Jones, responded (in a since-deleted tweet) that “it would be an honor” to claim responsibility for the destructive riots and the defamation of American Founding Fathers like George Washington.

In a November 9, 1995 op-ed, the 1619 Project founder condemned Christopher Columbus as “no different” from Adolf Hitler and demonized the “white race” as the true “savages” and “bloodsuckers.” She went on to describe “white America’s dream” as “colored America’s nightmare.” Rep. Ilhan Omar (D-Minn.) expressed a similar sentiment when she called for the “dismantling” of America’s “economy and political system,” in order to root out supposed racist oppression.


Yet the “1619 riots” have arguably oppressed black people far more than the U.S. supposedly does. The riots have destroyed black lives, black livelihoods, and black monuments. At least 22 Americans have died in the riots, most of them black. Retired police chief David Dorn was killed by looters breaking into his pawnshop in St. Louis. Chris Beaty was shot while helping two women who were being mugged in Indianapolis. Antonio Mays Jr., a 16-year-old boy, was shot and killed outside the Capitol Hill Occupied Protest (CHOP) in Seattle. Secoriea Taylor — an 8-year-old girl! — was fatally shot as her mother attempted to park a car near a group of protesters close to the Wendy’s where Rayshard Brooks had been killed by police.

Lilith Sinclair likely has the best of intentions for her advocacy — that’s what makes it so tragic. Indeed, she told the Mercury that she cares a great deal about providing essential goods and services to help her community.

Yet this advocacy for the “abolition” of the United States, her rejection of “colonized thought,” and her goal to expunge the “genocide” of America’s founding are truly dangerous. She has brainwashed herself and she is fighting to destroy a country that has brought an unprecedented degree of freedom and prosperity to its citizens and to the world.

After the rally that Lilith Sinclair addressed, rioters launched fireworks and other incendiary devices near the Portland Police Bureau as others walked the streets with katanas. The next day, antifa rioters set fire to the police union and again attacked the federal courthouse and Justice Center. Portland is a war zone, thanks in large part to this noxious critical theory.


Tyler O’Neil is the author of Making Hate Pay: The Corruption of the Southern Poverty Law Center. Follow him on Twitter at @Tyler2ONeil.

Did Trump Shame Portland’s Mayor Into Putting Down the Autonomous Zone? Sure Looks That Way…

Say Their Names: 22 People Killed in the George Floyd Riots