It is pretty well established that Portland, OR, has decided that it would rather look like a scene from the old Mad Max movies, albeit with emaciated, black-clad, and imbecilic characters, than anything one would see in the civilized world. Portland cops, who have coddled and protected the Antifa and black bloc thugs for about four years, are either too cowardly, scooped, or emasculated to do anything about it.

For several nights, these hoodlums have tried to attack the federal courthouse in Portland and have been resisted by federal officers from ICE and Border Patrol. Though these ill-bred and unwashed thuglets are portrayed by their fanbois and enablers as “peaceful” demonstrators, they are anything but. Their lack of physical ability and any conception of planning while attacking the federal building might seem laughable, but they are becoming more and more violent.

This is footage from last night at SW 3/Main. Some fires were lit in the area and streets were blocked. Most criminal acts were directed at the Federal Courthouse and Federal Officers made several arrests. pic.twitter.com/TKc8BLnglR

For the past several days the extreme, anti-American left has been obsessed with the increasingly effective measures taken by federal law enforcement agencies to suppress the active and local-government-encouraged riots that have been a nightly activity in Portland, OR, for over a month. (See Portland’s Mayor Tries to Blame Trump for Riots, Gets Fact-Checked In Real Time and Portland Antifa Tries to Wreak Havoc Again, Gets an Assist From Conspiracy-Spreading Dems and Media.)

Part of the effectiveness comes from the increasing aggressiveness on the part of federal law enforcement and their willingness to treat these people for what they are, that is, domestic terrorists. They are foiling attacks, and they are using classic cuff-’em-and-stuff-’em tactics

This morning Trump threatened to send federal officers into cities.

Except it’s not just a threat. It’s already happening in Portland and it’s not making national news for some reason.

This is last night ?? and it’s been happening for over a week now.pic.twitter.com/FZTpbwKg4L

News: Customs and Border Patrol says that its agents were responsible for the arrest this week shown in the viral video video from Portland. https://t.co/7etU8WUlIo pic.twitter.com/m72lv8ZhAp

WATCH – Portland Police officers knock a protester off of his bicycle and arrest him outside of Lownsdale Square Park near the Federal Courthouse downtown #LiveOnK2 pic.twitter.com/tow0GzeyzW 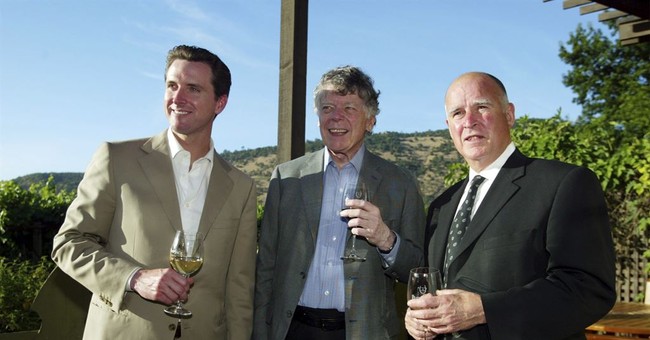 Naturally, in the eyes of the ACLU, this assault on insurrection and sedition cannot stand, and they’ve filed a lawsuit to prevent federal agents for interfering with the activities of ‘journalists’ and ‘legal observers’ near the scenes of violent attacks on federal facilities.

Breaking: ACLU files lawsuit against Department of Homeland Security agents and US Marshals deployed in Portland, seeking a temporary restraining order to block them from assaulting press and legal observers. ACLU says it’s the first of many suits https://t.co/idUUY9ouYf pic.twitter.com/rrBDMSkMAP

If you click-through to the lawsuit, the ACLU has offered this helpful hint on how federal authorities, because there are no apparent state or local authorities on the job in Portland, can sort out the ‘journalists’ and ‘legal observers’ from mere Antifa and black bloc trash

It doesn’t take a legal mastermind to see the fallacy here. You can bet the next mob that shows up will be 50% ‘journalists’ and 50% ‘legal observers’ as there is no feasible way to control the issue of these bogus credentials.

The odds are that the ACLU will win the first round as an Obama-appointed judge who used to be both a partner in Perkins Coie and an ACLU volunteer lawyer is overseeing the case.

Until then, I hope feds continue to harass and interdict these clowns by every legal and colorably legal means they can dream up.