Your Books Could Be Another 2020 Woke Casualty

Hide Your Books From the “Peaceful Protesters”

Well, Ray Bradbury warned us, didn’t he? Or he tried to anyway.

As this once great land descends even further into this “check your privilege” wokescold madness the lawless not only want to govern your actions, but your thoughts as well. What so many are hailing as a transformative moment in American history is really a dystopian thought-policing nightmare.


A recurring theme in history is that the thought fascists like to tightly control what the people it seeks to oppress read. Propaganda doesn’t work well if the masses can read whatever they want. Social justice warriors have been coming after books for a while now, most often Mark Twain’s the Adventures of Huckleberry Finn, which Ernest Hemingway said was the launching point of modern American literature. A censored version of it was released in 2011 and even The New York Times found it problematic.

The Times would more than likely embrace the book today.

Just when you think that there couldn’t be anything more annoying than watching idiots kneel all about the place comes a post on NPR.org titled “Your Bookshelf May Be Part of the Problem.”

Some of this examination of the power of books borders on thoughtful, but two paragraphs just grated on me:

You may have seen the phrase “decolonize your bookshelf” floating around. In essence, it is about actively resisting and casting aside the colonialist ideas of narrative, storytelling, and literature that have pervaded the American psyche for so long.

If you are white, take a moment to examine your bookshelf. What do you see? What books and authors have you allowed to influence your worldview, and how you process the issues of racism and prejudice toward the disenfranchised? Have you considered that, if you identify as white and read only the work of white authors, you are in some ways listening to an extension of your own voice on repeat? While the details and depth of experience may differ, white voices have dominated what has been considered canon for eons. That means non-white readers have had to process stories and historical events through a white author’s lens. The problem goes deeper than that, anyway, considering that even now 76% of publishing professionals — the people you might call the gatekeepers — are white.


The progressives in academia have spent decades bad-mouthing and marginalizing the Western canon in an effort to “enlighten” the youth of America. It’s a “throw the baby out with the bathwater” approach that views any book written by “dead white men” as dangerous and is part of an anti-intellectual approach to history that is used as a launching point for academic anti-American screeds. 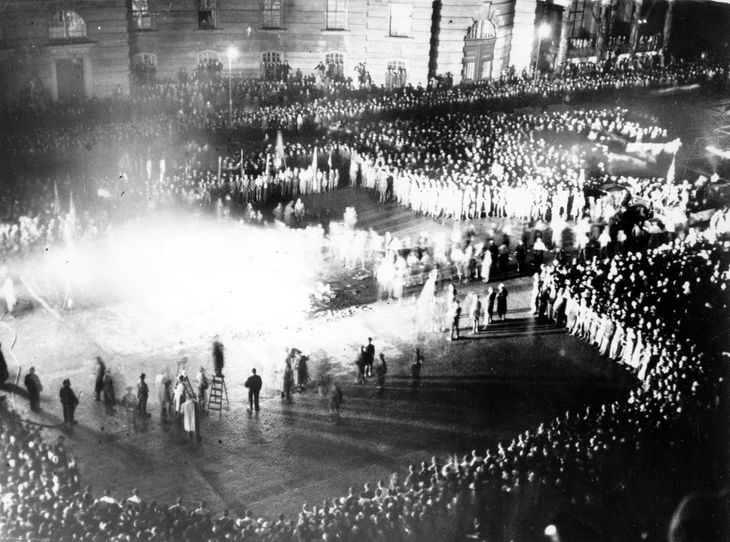 A large crowd gathers to witness the book burning, Buecherverbrennung, at Opera Square in Berlin, Germany on May 10, 1933. Students threw a thousand torches on the bonfire and seized “un-German” books from trucks and hurled them into the blaze amid cheers. The chosen books included writings of some of Germany’s best-known authors, as well as foreign writers. (AP Photo)

The books on my shelf aren’t a road map of my process of forming a worldview, they’re a reflection of occasional curiosities. Living in Los Angeles for 25 out of the last 30 years probably did more in that regard than Henry James ever could. There will be no examination of my shelves to see if the books featuring Polish poets, Korean women writers or, on occasion, James Patterson are making me an un-woke racist monster.

Oh, there are a few Tolkien books there too. He went to Mass every day, so that’s probably just reinforcing my Roman Catholic patriarchal privilege.

We learn a lot from books, of course, but reading for me is another form of escapism, even non-fiction. The wokescolds have ruined most of television and movies, now they want to come into my living room and start wagging fingers at my reading list. All hell is going to break loose when they find out that I decided to tackle Proust during the shutdown.


Obviously, people aren’t literally burning books just yet. The spirit of book burning is upon us though. With what we have seen in the past ten days from the rage mob, expecting the leftist worst from them really isn’t a stretch.

My latest column: The American Experiment Isn’t Dead Yet but the Lab Is on Fire Right Now

White Liberals’ ‘I Am Spartacus’ Moment

Foreign Minister Says U.S. Troops in Germany Are in the Interest of ‘Both Countries’

Is There Really an ‘Epidemic’ of Racist Police Shootings? Several Studies Say No.

Never capitulate to these lunatics. The Woke Beast Cannot Be Appeased: Woke Employees at Woke Ohio Taco Joint Walk Off Job After Refusing to Fill Order for Cops

Democrat-run cities will all be war zones for a while. LA Mayor Garcetti Calls His Cops ‘Killers.’ The ‘Killers’ Just Sent a Reply to the ‘Unstable’ Mayor

GOP Hold on the Senate Said to Be Slipping (Snort)

Leftist/Jihadist Common Goal: ‘This S–t Won’t Ever Stop Unless We F–kin’ Take It All Down’

Ivanka Trump Commencement Speech Canceled Due to Her Lack of Wokeness

Defunding Police Is Fringe. But Police Unions Do Need Reform.

Millions of live ruined because Gretchen Whitmer and Gavin Newsom wanted to be Mussolini. Nobel Scientist Says Lockdown ‘Saved No Lives’ and ‘May Have Cost Lives’

No, George Floyd and Palestinian Eyad Hallaq Are Not the Same

J.K. Rowling Speaks Truth About Transgenderism; Will She Be Canceled?

Why Is China Acting Against India, Hong Kong, the South China Sea, and Taiwan All at Once?

Hickenlooper Guilty On Ethics Charges. So Now What?


No, Trumps Actions Won’t Make 2A Supporters Back Biden

Schlichter: More Than Ever, It’s Time to Unleash the Power of ‘No’

AG Barr Responds to Media Lies About D.C. Riots and Trump’s ‘Demand’ to Send in Troops

Liberals ruin everything. That’s All Folks: Warner Bros Is Stripping Elmer Fudd of His Rifle in His Chase of Bugs Bunny

Watching the Left eat their own is always a delight. NYTs Editorial Page Editor ‘Resigns’ Over Tom Cotton’s Op-Ed, and the Gaslighting Begins

De Blasio Says He Will Move NYPD Funding to ‘Youth and Social Services’: ‘Young People Need to Be Reached, Not Policed’

BINGO. Can’t We Just Say It? This Wuhan Panic Was a Fraud Driven by Politics and for the Aggrandizement of Power

Petty Tyrant Update: Whitmer Loses Yet Another Round In Court

Biden Surrogate AOC: What Will You Do To Defund The Police?

In other news, the president is on Snapchat. Ted Cruz: “Snapchat Is Explicitly Censoring” Trump’s Account

GOT HIM: Arrest made in connection with the murder of Ret. Capt. David Dorn

Priceless: ‘You should study RIOTS’: Jim Treacher TORCHES Ali Velshi for guilting all of America for being ‘racist’ in vicious back and forth

Teen who worked all night to clean community after protests rewarded with car, scholarship

[#WorkOfTheDay]
The sense of melancholy generated by the soft, iridescent light lends a depth and gravity to the scene, reminding us that the drawing dates from the last years of th artist’s life, Claude Gellée.
👉 https://t.co/GJK9d3hTMc#PrintsDrawings pic.twitter.com/Uzy2Oabdep


It’s that time of year when vodka popsicles are all the keep me tethered to reality.