[Video] ‘Grief-Stricken’ Seattle Rioters Loot an AR-15 From Cop Car. What Happened Next Will Make You Cheer

In Seattle, riotous thugs “honored” the memory of George Floyd, who was killed while in Minneapolis police custody earlier this week, by blocking Interstate 5 for most of the day in the busiest downtown portion of the freeway. They looted a Nordstrom store, smashed windows of downtown businesses and set cars on fire. It was part of a nation wide series of riots that began in Minneapolis and quickly metastasized to the West Coast and all the way to the White House gates.

Somehow in the melee, KING 5 News, captured video of bandanna wearing antifa dirtbag who stole an AR-15 type rifle from one of two smashed up police cars. The cars, one of which was burning, was tagged with the Left’s favorite anti-cop epithet ACAB – All Cops Are Bastards.

Seattle’s Own ‘Shaft’ Came to the Riot

Knowing antifa’s thuggery and how cops are too busy to protect anyone,  one TV news station had the foresight to hire what they called a “security guard.”

This was no mall cop.

George Orwell famously said “People sleep peaceably in their beds at night only because rough men stand ready to do violence on their behalf.” And thank God a Seattle TV station hired one.

As the mayor ordered police officers and National Guard troops to corral the protesters, fetch them water and and cut their meat for them, there was this guy. 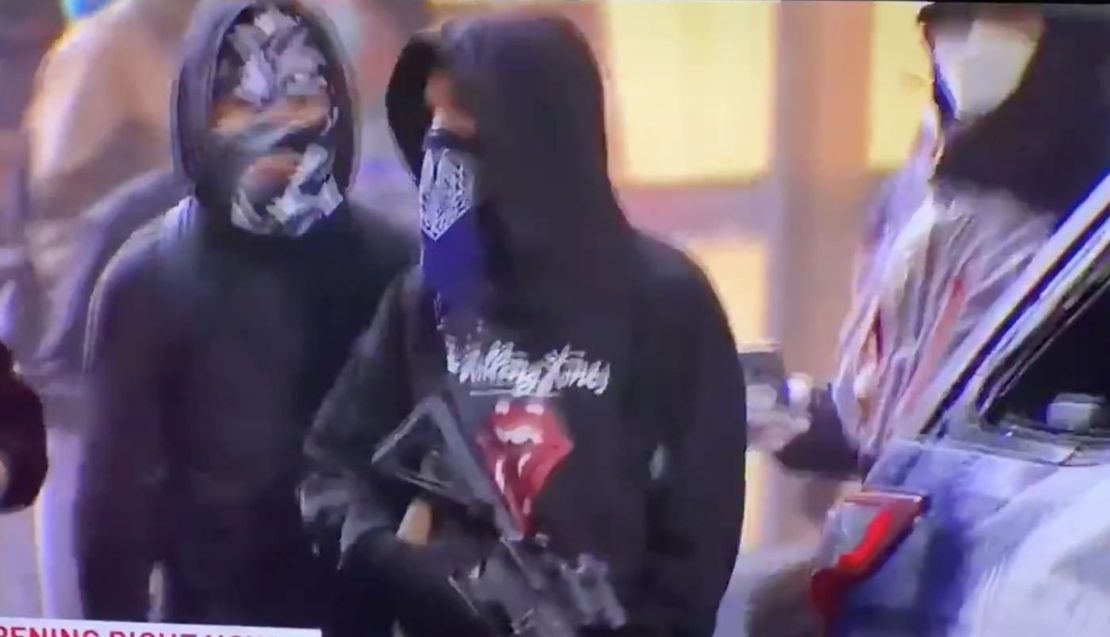 Q-13 News confirms that it hired Shaft (above) who looked like he was two parts top security professional and one part raw nerve.

As I explained on air, our security guard felt that the public was in danger. He took the AR 15 from the rioter and disabled it. We called 911 and waited to hand it over and continue our reporting. Protesters surrounded us, calling us police. (1/2) https://t.co/q9jypdxfco

He moved on the antifa boy and his buddies so fast, grabbed the stolen AR-15 and ejected the magazine so quickly and efficiently, without looking, that it impressed this retired cop friend who told me he was duly impressed.

“Great work. He’s good. He’s very good with firearms. Handled his Glock nicely. Snatched Stupid’s rifle, handed him off and then cleared the recovered rifle like a boss. Didn’t even have to glance to get any of the work done.”

Crazy! Guy finds what looks like AR-15 in busted up police cruiser and gets gun pulled on him immediately. #seattleprotest pic.twitter.com/fXAvB9Wkzo

And here’s another angle of it.

#BREAKING: It appears a rifle-wielding rioter in #Seattle was disarmed by a plain-clothes police officer


This might become must-see TV for some security services training.

Black Lives Matter helpfully sent out this tweet to remind looters, rioters, thugs and AR-15 carriers to be safe out there.

The fact that this is in Downtown Seattle happening right now is crazy, to everyone out there protesting stay safe. #BlackLivesMatter #SeattleProtest pic.twitter.com/1fe4ZWyQ91

And as for that AR-15 antifa “protester”? His mom’s going to be very upset when she goes to launder his underwear.

Mayor: Minnesota Rioters Are From Out of State, Just Like Antifa and BLM Riots

Some Unexpected Voices of Reason Emerge From the Riots