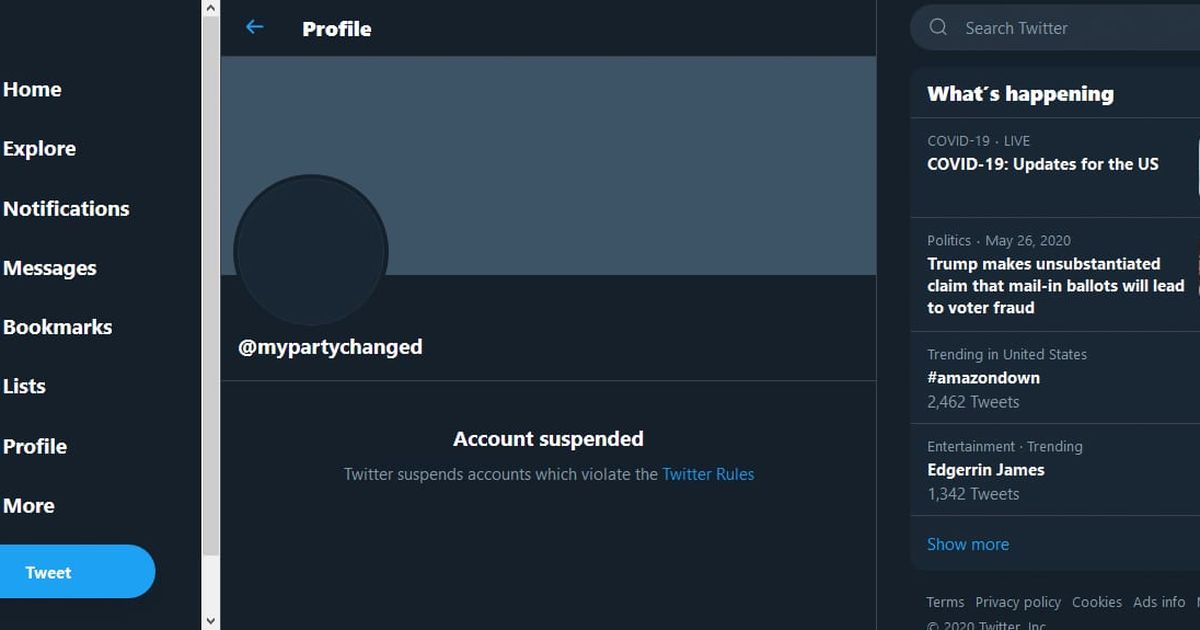 Oregon voters have reported dozens — perhaps hundreds — of problems with their party affiliation on mail-in ballots for the primary election that occurred last week. Several groups, including the Oregon Republican Party, have collected reports for an investigation into the matter. Now, however, Twitter has suspended the account @MyVoteChanged after the Secretary of State’s office called these reports “misinformation.”

Twitter and Facebook are taking steps to stop the spread of misinformation about Oregon’s elections system, after Republican Secretary of State Bev Clarno’s administration alerted the social media companies to what she said were falsehoods being shared on their platforms.

After Clarno’s administration contacted the social media companies, Facebook tagged the post as “partly false” and began referring people to fact checks on it by the websites PolitiFact, run by the journalism nonprofit Poynter Institute, and Lead Stories, which is a project of the nonpartisan Rand Corporation think tank. Twitter suspended the “My party changed” account on Friday.

The OregonLive report spends about 95% of its words dismissing the claims of the hundreds of voters who say they received the wrong ballot in the primary, and the Secretary of State’s office has consistently refused to look into the matter. Despite identifying as a Republican, appointed Secretary of State Bev Clarno appears much more closely aligned with Governor Kate Brown (D-Portland) than with her deceased predecessor, Dennis Richardson (R-Central Point).


Last Tuesday, reports began flooding in that voters had received the wrong ballots. Some Republicans received ballots for non-affiliated voters, so they couldn’t vote in the closed party primary. Some non-affiliated voters received ballots for partisan primary elections for which they were ineligible to vote. In a normal year, Oregon sees a number of these types of complaints, with the majority ending up as user error. However, this year, the number of reports has skyrocketed.

A handful of affected voters started a Facebook group on May 8 for people to report their problems, and at least one Republican legislator began investigating. As more and more users posted their complaints, they began seeing fact-checking notices under their posts, quoting the Secretary of State spokesperson who called all such reports misinformation. That spokesperson happens to be a holdover from Kate Brown’s staff when she held the position prior to becoming governor.

This only made the affected voters more determined, as they reported multiple unauthorized changes in their voting status on the Secretary of State website. Many reported discovering that their party affiliation had changed, changing it back to the proper affiliation, and seeing the error crop up again. Many reported difficulty going to their county election office to get the proper ballot, especially as offices remained largely closed due to the CCP coronavirus pandemic and state lockdown orders.


Way down near the bottom of the article, the OregonLive reporter does give some time to the woman who started the social media campaign to investigate these claims:

[Andrea] Chaisson, who lives outside The Dalles, said she started the Facebook group in early May after a friend who wanted to vote in the 2nd Congressional District primary found out she could not do so because she was registered as a nonaffiliated voter. Chaisson, a registered Republican, was not personally affected.

“We started a Twitter page because we started seeing we were getting fact checked on Facebook,” Chaisson said. “And it got suspended within a couple days … We rely on social media to tell our story.”

She announced Friday afternoon on Facebook that someone from the Trump campaign tasked with “elections security” reached out to her group, although Chaisson told The Oregonian/OregonLive that the campaign staffer said Trump is “more worried about the general (election).”

With reporting like this, it’s little wonder that many Oregon voters feel like the state Democrat-media complex is stacked against them. It’s just disappointing to see a Republican secretary of State joining in on dismissing these claims without any scrutiny.