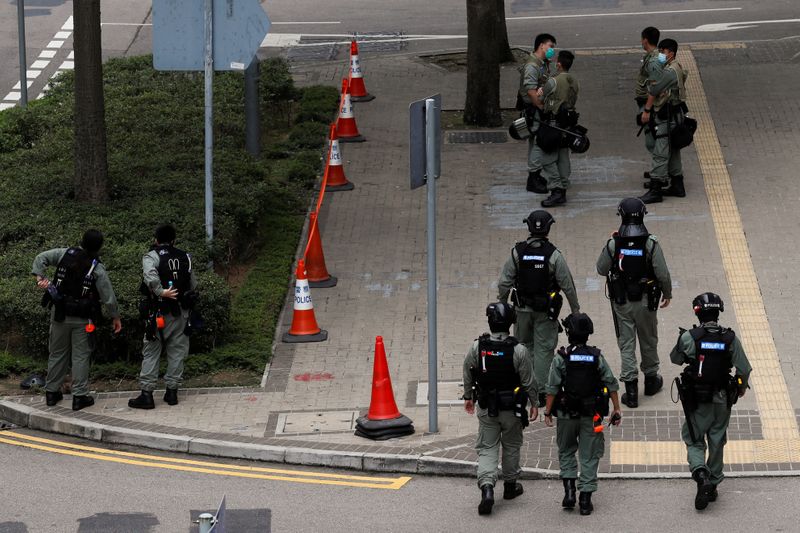 WASHINGTON/HONG KONG (Reuters) – U.S. Secretary of State Mike Pompeo told Congress on Wednesday that Hong Kong no longer qualifies for its special status under U.S. law, potentially dealing a crushing blow to its status as a major financial hub.

China had undermined Hong Kong’s autonomy so fundamentally, Pompeo said, that he could not support its recertification for its special pre-1997 trading status.

China’s plan for new security legislation triggered protests in the territory, and it now falls to President Donald Trump to decide to end some, all or none of the U.S. economic privileges the territory enjoys.

While Pompeo made no recommendations in his statement, Trump has a long list of possible responses, including visa and economic sanctions, David Stilwell, the State Department’s assistant secretary for East Asia, told reporters.

People familiar with the matter told Reuters the Trump administration was considering suspending Hong Kong’s preferential tariff rates for exports to the United States as part of its response to China’s plan.

Trump could also opt for targeted sanctions against Chinese officials, government entities and businesses involved in enforcing the new legislation, according one of the sources, who spoke on condition of anonymity.

Trump, already at odds with Beijing over trade and the coronavirus pandemic, had said on Tuesday Washington was working on a strong response that would be announced before the end of the week.

Late into the evening, protesters were still cramming sidewalks, chanting for full democracy and for Hong Kong to seek independence from China, saying this is now “the only way out”.

Pompeo said China’s plan to impose the new legislation was “only the latest in a series of actions that fundamentally undermine Hong Kong’s autonomy and freedoms.

“No reasonable person can assert today that Hong Kong maintains a high degree of autonomy from China, given facts on the ground,” he said.

He said he certified to Congress that Hong Kong no longer warrants treatment under U.S. laws “in the same manner as U.S. laws were applied to Hong Kong before July 1997,” when Britain ended its administration of the territory and returned it to China.

“It is now clear that China is modeling Hong Kong after itself,” Pompeo said.

The United States, the European Union, Britain and others have expressed concern about the legislation, widely seen as a possible turning point for China’s freest city.

Specifics of Hong Kong’s security bill remain unclear and will not be enacted until later. It is meant to tackle secession, subversion and terrorism after major unrest last year and could see Chinese intelligence agencies set up bases in Hong Kong.

Asked to comment on Pompeo’s statement, China’s embassy in Washington repeated past statements from Beijing and Hong Kong’s Beijing-backed government that the security law is no threat to the city’s high degree of autonomy and will be tightly focused.

“As for foreign meddling in Hong Kong affairs, we will take necessary countermeasures in response,” it said, echoing previous Chinese statements.

A heavy police presence around Hong Kong’s Legislative Council on Wednesday deterred protesters from disrupting debate of a bill that would criminalise disrespect of the Chinese national anthem. That is expected to become law next month.