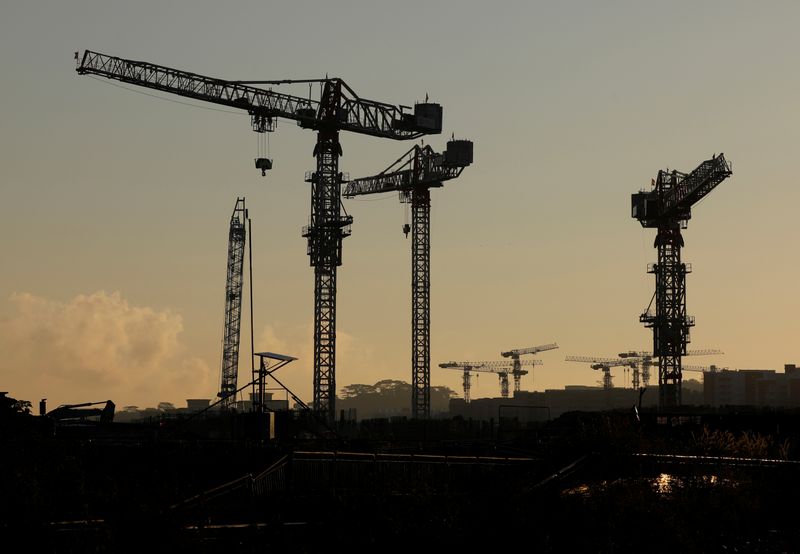 FILE PHOTO: A view of a construction site that has stopped work since the start of the “circuit breaker” measures to curb the coronavirus disease (COVID-19) outbreak in Singapore April 20, 2020. REUTERS/Edgar Su

By Aradhana Aravindan and John Geddie

SINGAPORE (Reuters) – Singapore downgraded its 2020 gross domestic product forecast for the third time on Tuesday, the trade ministry said, as the bellwether economy braces for its deepest ever recession.

Singapore’s economy shrank 0.7% year-on-year in the first quarter and 4.7% on a quarter-on-quarter, a less severe decline than advance estimates, although officials and analysts warned of more pain ahead.

“There continues to be a significant degree of uncertainty over the length and severity of the COVID-19 outbreak, as well as the trajectory of the economic recovery,” said Gabriel Lim, permanent secretary at the ministry of trade and industry.

Following the news, the central bank chief economist Ed Robinson said monetary policy remains unchanged and will next be reviewed in October, as planned.

Exports have been a rare bright spot for the economy in recent months mainly due to a surge in demand for pharmaceuticals.

Analysts expect the trade-reliant economy to see a deeper contraction in the second quarter due to a two-month lockdown, dubbed a “circuit breaker” by authorities, in which most workplaces closed to curb the spread of the novel coronavirus.

The city-state has among the highest number of infections in Asia and has said that easing of the lockdown from next month will only be done gradually.

“The downward revision…implies a significant deterioration in the second-quarter momentum due to the circuit breaker period as well as a weak recovery trajectory,” said Selena Ling, OCBC Bank’s head of treasury research and strategy.

Singapore’s finance minister is set to deliver the latest in a string of multi-billion-dollar economic packages to offset the hit to businesses and households from the pandemic later on Tuesday.