Does anyone seriously think that if Donald Trump were not president, the coronavirus pandemic would have never hit America? The super PAC Democratic Coalition — which supports presumptive Democratic nominee Joe Biden — apparently does, because it has launched a series of ads describing deaths from the coronavirus as the “Trump Death Toll.” For Memorial Day weekend, Democratic Coalition decided to jump the gun and push ads putting the “Trump Death Toll” at 100,000 — in Twitterspeak, “#TrumpDeathToll100K.”


It is absurd to blame Trump for every single coronavirus death, especially when the PAC supports Joe Biden. Democratic Coalition’s ad should get a “pants on fire” fact-check rating.

It’s Memorial Day weekend and this year, we should all reflect upon and mourn for 100,000 of our fellow Americans who have lost their lives to #COVID19.

A great many of those fallen countrymen could have been saved, if only Trump had done his job.#FocusOnTheTrumpDeathToll100K pic.twitter.com/mQkOzJLhZ5

Of course, the Democratic Coalition was far from alone in drawing attention to the 100,000 deaths milestone. On Saturday afternoon, The New York Times released the front page of its Sunday edition. The entire front page is a tribute to 1,000 Americans killed by the coronavirus. “U.S. Deaths Near 100,000, an Incalculable Loss,” runs the headline.

The front page of The New York Times for May 24, 2020 pic.twitter.com/Mp4figjnQe

Every death is tragic, and the coronavirus is dangerous, but Americans should put these numbers in perspective. First, while the 100,000 number seems jarring, it is significantly smaller than the number of Americans who die every year from smoking (480,000) and obesity (300,000). Another 88,000 Americans die from alcohol every single year.

Why the comparison? As it turns out, deaths from the coronavirus pandemic are inflated in at least two ways. First, as New York funeral home directors explained, many death certificates mark “COVID-19” as the cause of death even when the deceased had not tested positive for the coronavirus, much less actually died of it. Second, most of those who have died from coronavirus had underlying health problems.


Studies have suggested the coronavirus death rate is below 1 percent, and the Centers for Disease Control and Prevention (CDC) released death rates along those lines. The CDC estimated that about 35 percent of coronavirus cases are asymptomatic, and only 0.4 percent of those who come down with symptoms will die. As PJ Media’s Matt Margolis explained, that translates to a 0.26 percent fatality rate for all infections across all age groups, the symptomatic as well as the asymptomatic.

Furthermore, even that low death rate of 0.4 percent among the symptomatic is heavily skewed toward the elderly. Here’s the age breakdown:

The elderly and those with pre-existing health problems are most likely to die from the virus. As San Diego County Supervisor Jim Desmond put it, “we’ve unfortunately had six pure, solely coronavirus deaths” out of the roughly 190 deaths reported for San Diego, Calif. Most of those who died had comorbidities that make them more vulnerable, such as central obesity, high blood pressure, high cholesterol, insulin resistance, and diabetes.

Each of these deaths is tragic, and the fact that the elderly are most likely to die from the virus does not excuse those who needlessly put the lives of the aged at risk — like Gov. Andrew Cuomo (D-N.Y.), whose administration forced nursing homes to accept coronavirus patients discharged from the hospital. However, it is important to note that the coronavirus is not robbing young, healthy people of their lives at such a rate as to justify the kind of panic gripping so many Americans.

As PJ Media’s Stacey Lennox pointed out, relentlessly reporting the large numbers of confirmed cases and confirmed deaths is encouraging irrational panic. Many fear they will contract coronavirus by touching something after an infected person touched it, yet CDC data shows that surface transmission is extremely unlikely. Most transmission comes from close contact with an infected person over a period of time — either sheltering at home with someone or living in close quarters like in nursing homes or jails.

Wait, Did Schiff Just Say COVID-19 Deaths Are ‘Casualties’ of His Failure to Remove Trump in Impeachment?!

Is this all Trump’s fault?

Dr. Dena Grayson, an Ebola expert, retweeted the Times front page and said, “Many of these 100,000 American souls could have been saved, if [Trump] had acted to protect us. Instead, Trump acted only to help himself.” She added the hashtag “#TrumpDeathToll100K.” 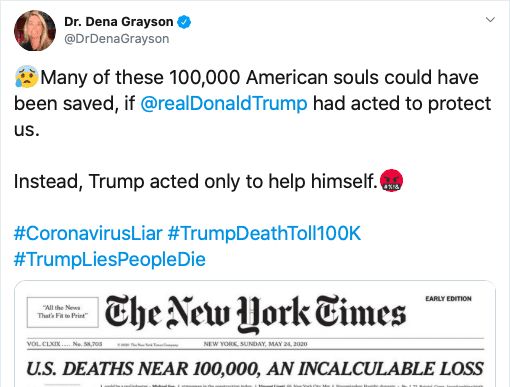 Rep. Adam Schiff (D-N.Y.) has also blamed Trump for coronavirus deaths, calling the deceased “casualties” of his failure to remove Trump in impeachment.

The Trump administration acted quickly as news of the coronavirus first broke. The CDC issued a travel notice for Wuhan, China, on January 6. On January 17, the CDC implemented public health entry screening at the 3 U.S. airports that received the most travelers from Wuhan: San Francisco, New York JFK, and Los Angeles. The White House created the Coronavirus Task Force on January 29. On January 31, the administration declared COVID-19 a public health emergency, announced Chinese travel restrictions, and suspended entry into the U.S. fo foreign nationals who posed a risk of transmitting the disease.

America was still unprepared for the pandemic, partially because the Chinese Communist Party lied about the virus, destroyed laboratory samples, and solicited personal protective equipment (PPE) across the world just as China was insisting there was no human-to-human transmission.


Trump gave contradictory statements about the coronavirus, but so did the medical experts whom he relied upon for information.

It seemed no matter what the president did, liberal critics would blame him for something. When he restricted travel, House Speaker Nancy Pelosi (D-Calif.) called it a “scare tactic.” Later on, she blamed him for not having restricted travel enough. She complained that Trump allowed “tens of thousands” of people to enter the country when the 40,000 he allowed back in were Americans, green-card holders, and noncitizen relatives who were allowed to enter the U.S. from China. Imagine how much Pelosi would have complained if he kept these people out.

Some condemned Trump for allowing the states to issue their own lockdown orders. Molly Jong-Fast, editor-at-large at the Daily Beast and contributor at The Bulwark, tweeted, “So the states are basically governing themselves because our president doesn’t know how to president at all?” In May, Melinda Gates condemned America’s “50 different homegrown state solutions” to the pandemic.

Yes, President Trump allowed the states to set their own rules to face the pandemic. The Founders instilled a principle called “federalism” into the Constitution, reserving rights to the states and to the people. As it turns out, New York City faces different challenges than Kansas does during the pandemic. Trump was wise to issue guidance, offer support and aid, and let the local and state leaders issue their own lockdowns and stay-at-home orders. Imagine how much liberals would have complained had Trump issued lockdown orders!

Trump encouraged social distancing, pushing the “14 days to slow the spread” message. He unleashed the power of the private sector to fight the virus. He gave near-daily briefings to keep the public informed. He coordinated with the House and the Senate to quickly pass three massive and unprecedented coronavirus relief efforts, strengthening America’s medical ability to fight the virus and helping with the economic fallout of the lockdowns.


He helped governors, sending supplies and aid. “Every single thing he said, they followed through on,” Gov. Gavin Newsom (D-Calif.) said. “We are working very well with FEMA reaching to them with the Army Corps of Engineers, building four field hospitals. That was a decision the president himself took and I’m grateful for it,” chimed in Gov. Phil Murphy (D-N.J.). “He has been responsive. He’s done a lot of good things, he has the Army Corps of Engineers in our state. He’s been very helpful and cooperative,” Gov. Andrew Cuomo (D-N.Y.) added.

The Alternative to Trump?

Meanwhile, naysayers accused him of racism. They began rooting against a safe drug that Trump hoped would help fight the coronavirus, hydroxychloroquine. In fact, they opposed hydroxychloroquine so vigorously that medical professionals struggled to find patients for scientific studies with the drug. Media outlets twisted a poorly-phrased question into an endorsement of injecting bleach to fight the virus.

Democrats abandoned good-faith efforts to provide coronavirus relief and pushed wish-list items instead. Some openly spoke about taking advantage of the crisis to advance their agenda, including Hillary Clinton and presumptive nominee Joe Biden.

Speaking of Biden, when it came time for him to present his own plan on the pandemic, he plagiarized Trump’s plan (he had dropped out of the 1988 Democratic Party for plagiarism, after all) and attacked Trump’s plan as insufficient. Biden assembled a team of experts, including Ezekiel Emanuel.

Emanuel published an op-ed in The Atlantic saying he wants to die at age 75 because life simply isn’t worth living after that point. His op-ed isn’t just personal, either — it attempts to convince the reader that death isn’t so bad an option compared to advanced age. The op-ed encouraged the elderly to avoid flu shots and vaccines, which would make them even more susceptible to contracting and dying from the coronavirus. The op-ed also warned about mental degeneration after age 75 … and Biden is 77.


Groups like the Demcoratic Coalition cannot seriously contend that Joe Biden would have been able to prevent the coronavirus crisis, can they? Most of the coronavirus cases across America trace back to the New York City area, and Mayor Bill de Blasio (D-N.Y.C.) and Gov. Cuomo delayed a lockdown in the once city most likely to spread the virus. Yet in the midst of the pandemic, Democrats seemed to consider nominating Cuomo instead of Biden…

The coronavirus pandemic is deadly, but it is important to put this threat in perspective. Misleading statistics have created undue panic, and the rush to accuse Trump for every death is not only disgusting but absurd. It seems rather likely the Democrats’ attempts to weaponize the coronavirus crisis will come back to bite them — as well it should.