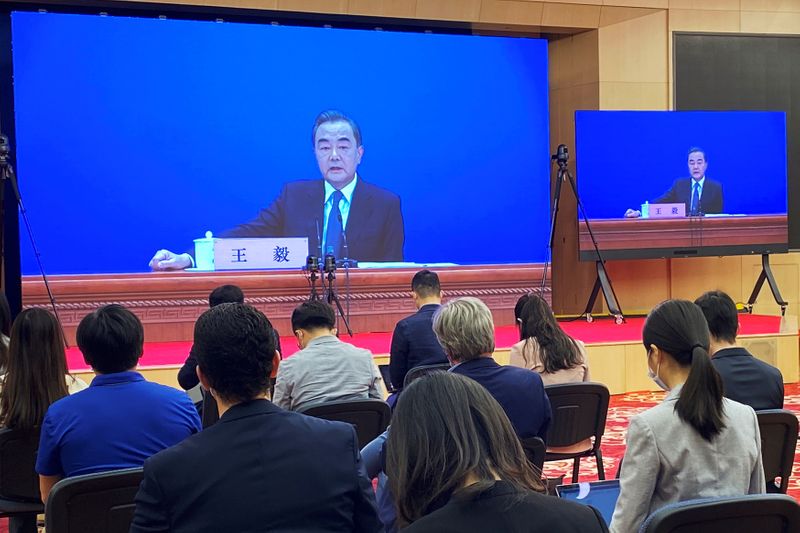 Chinese State Councillor and Foreign Minister Wang Yi is seen on screens at a media center during a news conference held via video link on the sidelines of the National People’s Congress (NPC), in Beijing, China May 24, 2020. REUTERS/Yew Lun Tian

By Kevin Yao and Judy Hua

BEIJING (Reuters) – China dropped its annual growth target for the first time on Friday and pledged more government spending as the COVID-19 pandemic hammers the world’s second-biggest economy, setting a somber tone to this year’s meeting of parliament.

The omission from Premier Li Keqiang’s work report marks the first time China has not set a target for gross domestic product (GDP) since 2002.

The economy shrank 6.8% in the first quarter, the first contraction in decades, hit by the outbreak of the new coronavirus, which started in the central Chinese city of Wuhan.

“We have not set a specific target for economic growth for the year, mainly because the global epidemic situation and economic and trade situation are very uncertain, and China’s development is facing some unpredictable factors,” Li said at the start of parliament.

Domestic consumption, investment and exports are falling, and the pressure on employment is rising significantly, while financial risks are mounting, he warned.

China has set a target to create over 9 million urban jobs this year, according to Li’s report, down from a goal of at least 11 million in 2019 and the lowest since 2013.

Ahead of the National People’s Congress, the week-long meeting of the largely rubber-stamp parliament, China’s top leaders have promised to boost stimulus to bolster the economy amid rising worries job losses could threaten social stability.

Beijing is also planning security legislation for Hong Kong, which Li said will provide a “sound” legal system and enforcement mechanisms but which critics say could curb autonomy in the city.

The move drew warnings from the United States, falls on Asian stock markets and calls among Hong Kong activists for protests in the former British colony.

The fiscal stimulus in Li’s report is equivalent to about 4.1% of China’s GDP, according to Reuters calculations based on the fiscal measures announced.

“The annual budget points to fiscal stimulus this year at least on par with that following the global financial crisis,” Julian Evans-Pritchard, senior China economist at Capital Economics, wrote in a note.

But Nie Wen, economist at Shanghai-based Hwabao Trust, said Li’s report indicates China will “not resort to mass stimulus that some market players have been betting on.”

Nie expects GDP growth to slow sharply this year to around 2% or 3% from last year’s 6.1%.

“This year’s economic growth needs to reach around 3% to create 9 million new urban jobs,” Nie said, adding that the size of the fiscal stimulus announced by Li is about 4 trillion yuan.

In line with the slower economy, China will raise defense spending by 6.6% this year, the slowest in three decades, while the budget for environmental protection will increase a modest 4%.

Monetary policy will be more flexible, Li said, adding that growth in M2 – a broad gauge of money supply – and total social financing will be significantly higher this year.

The People’s Bank of China (PBOC) will guide its benchmark lending rate lower, he said.

The central bank has cut the Loan Prime Rate (LPR) by 46 basis points since August 2019, when it replaced the previous benchmark lending rate. The one-year LPR rate is now 3.85%.

The PBOC has cut reserve requirement ratios 10 times since early 2018, including three cuts this year.

Small and midsize companies can delay paying loans and interest by a further nine months, through March 2021, and lending to SMEs by big commercial banks should grow more than 40%, Li said.

The tax and fee burden shouldered by companies will be cut by 2.5 trillion yuan this year, Li said.