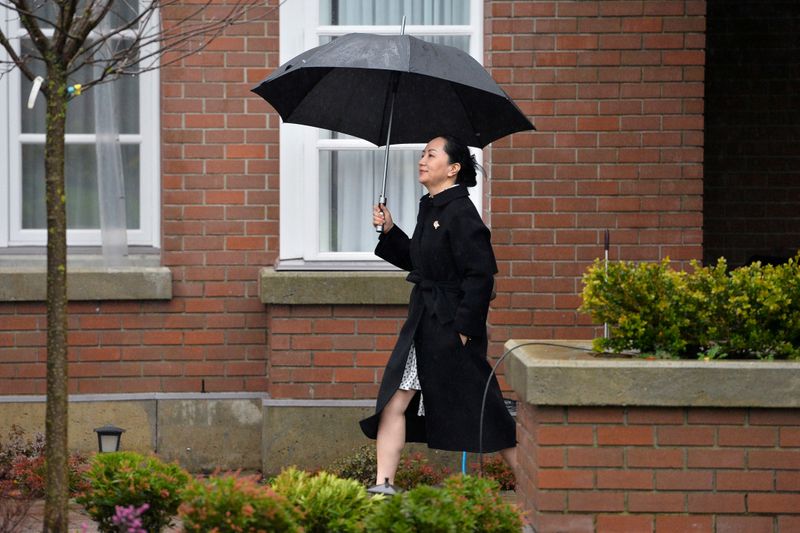 (Reuters) – A decision on a key legal aspect of the trial over whether Huawei Technologies Chief Financial Officer Meng Wanzhou can be extradited to the United States from Canada will be announced next Wednesday, the British Columbia Supreme Court said on Thursday.

Meng was arrested in December 2018 at Vancouver International Airport at the request of the United States on charges of bank fraud, and is accused of misleading HSBC <HSBA.L> about a Huawei Technologies Co Ltd-owned [HWT.UL]company’s dealings with Iran.

Meng, 48, has said she is innocent and is fighting extradition.

The case has strained relations between Ottawa and Beijing.

The judgment will deal with the charge of double criminality, deciding whether Meng’s actions were crimes in both Canada and the United States at the time of her arrest.

Meng’s lawyers argued that unlike the United States, Canada did not have sanctions against Iran at the time Canadian officials authorized the start of the extradition process, meaning Meng’s arrest did not meet the legal standard of double criminality.

Canadian prosecutors have argued that Meng should be extradited on fraud charges, and that contrary to her defense argument, the case is not solely about a violation of U.S. sanctions against Iran.

Should the judge rule that Meng’s actions were not a crime in Canada, the rest of the case “dies,” said Gary Botting, a criminal defense lawyer and extradition expert based in Vancouver. “If the double-criminality standard falls, she gets to go home. Not just walk but fly.”

Arguments on the double-criminality charge took place in January in Vancouver.

A court memo on Thursday said British Columbia Supreme Court Associate Chief Justice Heather Holmes would preside over an in-person court appearance by Meng and the other parties, once the decision is released at 11 a.m. PDT (1800 GMT) next Wednesday.

A second phase of the trial, focusing on abuse of process and whether Canadian officials followed the law while arresting Meng, is set to begin in June. Closing arguments are expected in the last week of September and the first week of October.

It could be years before a final decision is reached, since Canada’s justice system allows many decisions to be appealed.

(Reporting by Moira Warburton in Toronto; Editing by Denny Thomas and and Peter Cooney)