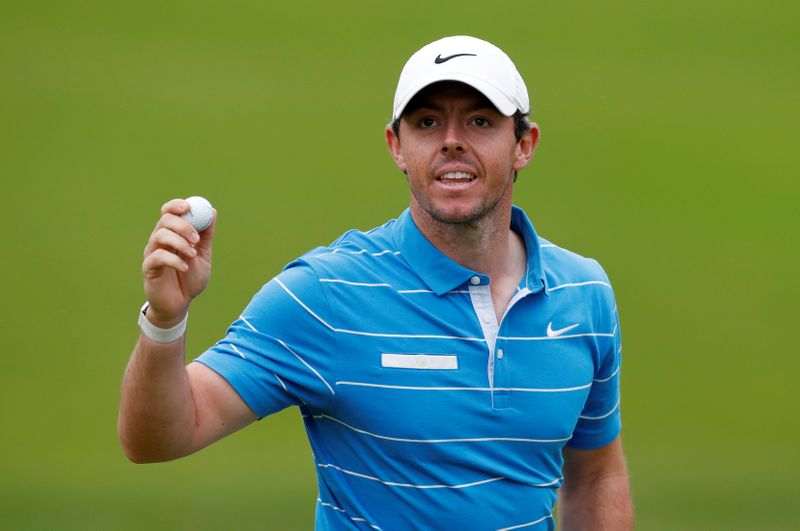 NEW YORK (Reuters) – A tie-break win for world number one Rory McIlroy and teammate Dustin Johnson at the Driving Relief two-on-two charity skins match Sunday injected suspense to a course absent of fans and applause in the COVID-19 era.

Wearing microphones that captured their smack talk and frustrations, caddie-less competitors McIlroy and Johnson faced off against Rickie Fowler and Matthew Wolff, carrying their own clubs and adhering to social distancing procedures after undergoing a battery of tests and screenings.

Eager golf fans tuned in for one of the rare few live televised events, and were treated to a bit of mild trash talk early on, as McIlroy teased his 21-year-old opponent Wolff after sinking a putt for par four on the second hole.

That bravado was eventually tempered, however, as Fowler’s seven birdies put pressure on the world number one and Johnson, the heavily favoured pair who boast five majors titles between them.

The competition came down to a closest-to-the-hole tiebreak, in which McIlroy clinched the victory despite an admirable 120-yard wedge shot from Wolff, letting out a whoop and offering his teammate an “air-five.”

“These Seminole greens, the ball can do funny things when you think it’s in a good place,” said McIlroy, who basked in the “normalcy” of being back in competition.

“It’s been awesome and it’s nice to get back on the golf course.”

Raising more than $5.5 million through sponsors and donations for COVID-19 relief, the competition quickly trended on social media, as golf-starved fans reveled in seeing their favourite players compete in unique circumstances.

“Does DJ (Dustin Johnson) legitimately not know how to carry a golf bag anymore or something?” tweeted @14Thaddeus14, as images of the 2016 U.S. Open champ’s clubs hanging haphazardly from his shoulder prompted good-natured ribbing on Twitter.

Wolff’s tie-dyed sneakers and handlebar mustache and Fowler’s pantomime gestures to an imaginary crowd proved that the proceedings were anything but business as usual, with comedic actor Bill Murray showing off his quarantine snacks during a Skype dial-in to the telecast.

The competitors swapped out the PGA Tour-mandated slacks for shorts in the 87-degree Fahrenheit heat, as clouds dotted the otherwise clear blue skies along the Florida coast.

As young Wolff’s nerves settled and Fowler visibly reveled in the return to competition, the scene was enough to make anyone a bit jealous – including world number two Jon Rahm.

“I think we’re all itching to be out there,” said Rahm, dialing in to the broadcast from his Arizona home. “I sure wish I was there.”

With professional sports slowly lurching back to life in empty stadiums, arenas and venues across the world, the event marked yet another incremental move forward into a new normal.

The PGA Tour is set to resume next month in a fanless setting for the Charles Schwab Challenge in Fort Worth, Texas, with players and caddies facing a host of tests and screenings.

NASCAR also resumed Sunday at South Carolina’s Darlington Raceway, and Major League Baseball is currently proposing ways in which it could salvage its 2020 season.

U.S. President Donald Trump dialed in to the golf broadcast to applaud the event, saying that live sports are good for the collective “psyche.”

“We want to get it back to where it was – we want big, big stadiums loaded with people,” Trump said.