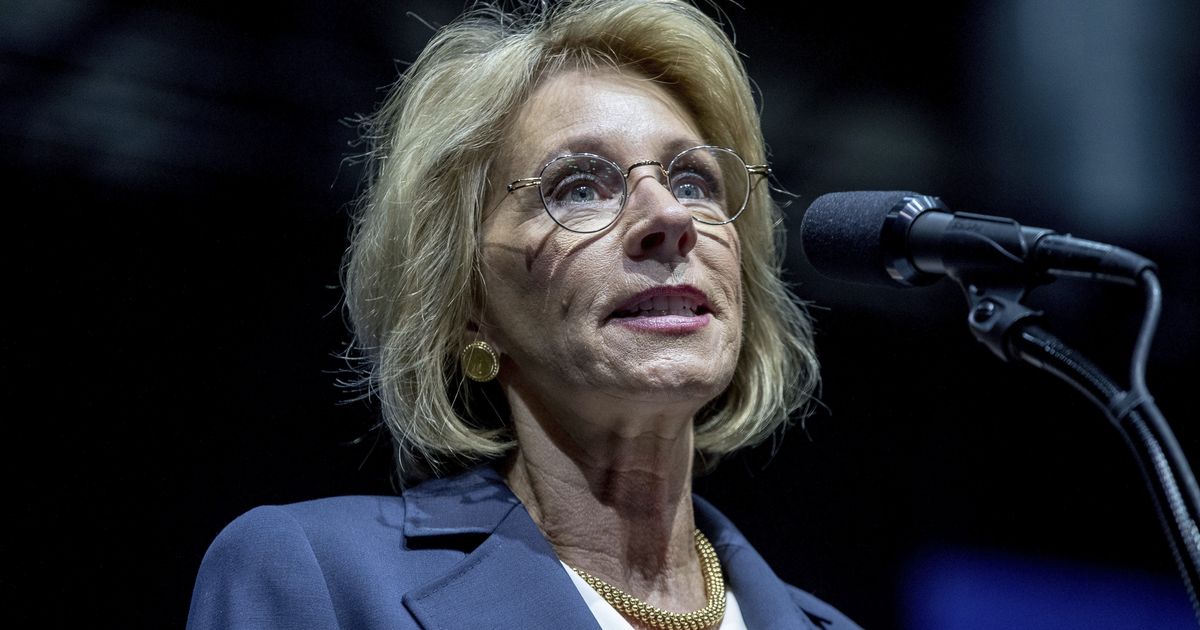 As was to be expected, the ACLU, in true leftist fashion, has launched a lawsuit to block Education Secretary Betsy DeVos’ effort to amend the application of Title IX provisions on university campuses and to reinstate fairness in campus rape and sexual assault trials. The ACLU need scarcely have bothered, for DeVos’ reforms amount to very little, do not address the substantive issues, and permit the Title IX disaster to continue indefinitely. Indeed, despite the barrage of reproach, censure and imprecation she has had to endure from the left, feminists can rejoice in the practical results of DeVos’ two-year investigation into what is nothing less than the travesty of “academic justice.”


DeVos has come in for praise from the conservative side of the political divide. Stephen Kruiser, for example, applauds the Education Secretary for “bringing some sanity and constitutional order back to college campuses.” According to Kruiser, she “has been working diligently to bring rules and order to a previously arbitrary system that gave almost no rights to the accused,” revising the Obama-era guidelines via the infamous “Dear Colleague” letter that effectively deprived male students of due process in rape and sexual assault accusations, however flimsy, whimsical or false.

Under the shadow of Title IX, male “perpetrators,” so-called, were often not permitted to hire a lawyer or to cross-examine their female accusers, and were often not apprised of the exact nature of the complaint or grievance for which they had to answer. They were the victims of administrative kangaroo courts, controlled by leftist “diversity officers” and radical feminists, who based their procedures on the “preponderance of evidence” model of arriving at verdicts—that is, whatever seemed credible in the absence of evidence. As a result, hundreds of young men saw their university careers destroyed and their dreams of the future irrevocably dashed. Male students learned they were always at risk of a false or preposterous accusation.

DeVos’ attempt to address the manifest injustice of these proceedings seemed promising and her aim to restore integrity to the dispensation of academic justice is certainly to be lauded. But it represents only a Pyrrhic victory as the parody of campus justice will persist indefinitely. Too much is left to the discretion of the robe and mortarboard.

Her critics know not whereof they speak, for DeVos’ changes turn out to be cosmetic rather than profound. The only positive outcomes in her Reform are that she narrowed the definition of sexual harassment to eliminate trivialities and fiddled with a few procedural adjustments, such as allowing the respondent to hire a lawyer (assuming he could afford one) and to review a written statement detailing the accusation. It is far from enough. The issues which DeVos failed to address are many and non-dispositive, some so obvious as to suggest an access of willful blindness.


To begin with, are campuses really hotbeds of sexual assaults visited upon hapless and innocent young females by legions of rabid male predators? Is there really a “scourge” in process, as she asserts? Consider that the number of females enrolling in university exceeds that of men—56% to 44% according to The Washington Post—while male enrollment continues to decline alarmingly. Why would parents send their daughters into the danger zone if they stood a good chance of being attacked and violated? Surely members of Congress, media figures, university professors and administrators, leftist ideologues and members of the public have seen their daughters through college without the negative consequences touted by feminists and their enablers.

The rape pandemic does not exist. Certainly, sexual hijinks and liaisons occur, as they would in any community composed of men and women. Hook-up culture is shared equally by both sexes. But the campus is by its very nature a “safe zone” writ large, a far more benign and comfortable environment than the world outside the hallowed walls. The entire issue of a male-dominated raptorial campus is either a fantasy of overheated imaginations or a strategy to re-make the university as a center of political and feminist indoctrination.

Secondly, the new set of guidelines will not deter leftist administrators and their feminist allies from working overtime to dilute or even ignore DeVos’ toothless initiatives—for one does not see how they can be enforced, such as they are. Judgment will continue to be weighted in favor of the female plaintiff under the guise of formal equity which will operate as a fig leaf. DeVos’ own language is already laden with the presumption of guilt. In her video presentation announcing the New Title IX Regulation, she refers to the female complainant as a “survivor” and the male accused as the “alleged perpetrator.” But if the perpetrator is merely “alleged,” then how can the complainant be called a “survivor”? A survivor of what? She must surely be an “alleged survivor.” DeVos’ entire screed is peppered with the word “survivor,” which operates not only as an inapt descriptor but a surreptitious claim. Repeated often enough, it becomes believable.


The word “survivor” is clearly overwrought and presumes far more than is generally the case. One may survive a fire or a car accident or a terrorist attack, but it does not make sense to “survive” what may in most cases be nothing more than repeated requests for a date, a mutual—that is, consensual—alcohol binge, or a morning-after regret for consensual sex. As they say, Get Real!

But DeVos is not done yet. “Our rule,” says DeVos, “protects survivors against retaliation”—but she makes no mention of protecting the accused against retaliation should he be exonerated. “Due process,” she says, “is not just for men”—but when did college men who found themselves accused of sexual assault ever receive due process in the first place? She extends the right of appeal to both parties in cases of harassment, assault or rape, but this makes little sense in the event of a favorable verdict for the accused man, who should then enjoy the benefit of the double jeopardy rule not to be tried again for the same “crime.” (See Section 106.45(b)(1)(viii), pp. 912-14 of the Amending Document in the Federal Register.)

Further, so far as I can see, she never once mentions the phrase “false accusation.” Additionally, she deplores the fact that the plethora of lawsuits leading to the overturning of unfair verdicts can result in suffering for “survivors.” She utters not a word about the young men whose suffering is real and who can now contemplate the wreckage of their aspirations, for vindication does not necessarily lead to re-instatement and often comes too late to make a difference.

In her more compact U.S. Department of Education report, we are presented with a number of key revisions to Title IX. We are informed that the new Regulation “Shields survivors from having to come face-to-face with the accused during a hearing and from answering questions posed personally by the accused.” I would ask why? The implication is that the “survivor” is a wilting mimosa and the accused a brutal aggressor. But the incident in question is obviously no less traumatic or intimidating for the respondent than it is for the complainant, as the anti-university lawsuits proliferating around the country filed by wrongly convicted men attest.


Another provision “Requires schools to select one of two standards of evidence, the preponderance of the evidence standard or the clear and convincing evidence standard—and to apply the selected standard evenly to proceedings for all students and employees, including faculty.” But as we’ve seen, the preponderance of evidence model is problematic, based on a 50+1 “more probable” assessment. The clear and convincing standard offers little improvement, formulated as “highly more probable and substantial than not”—which could mean anything the investigators want it to mean.

The third and dispositive standard, generally used in criminal cases (and sexual assault is a criminal matter)—“beyond a reasonable doubt”—is never mentioned although it constitutes the proper and only standard of justice to be invoked. True, this standard may also be prostituted in trials dominated by special interests or mob pressure, but it is the best we have, predicated on the famed Blackstone ratio: “Better that ten guilty persons escape than that one innocent suffer.” Again, the DeVos provision furnishes enormous latitude for the kind of process abuse the Regulation is purportedly meant to correct.

Indeed, what DeVos’ video presentation, Department of Education report, and Amending Document together reveal is how deeply and completely feminist presuppositions have sunk into the cultural sediment, so that one is not even aware that one is rehashing feminist talking points.

Finally, why are university administrators and “diversity officers,” who have no expertise in presiding over courts of law, accumulating evidence, cross-examining witnesses or dealing with legal precedents, the history of stare decisis and complexity theory—i.e., “the networked relationship between the rules adopted by the legislature, courts and executive”—empowered to act as both prosecutors and judges? Such trials are matters pertaining to civil and criminal courts staffed by professionals trained in the evaluation of testimony, the determination of fact, the mastery of legislative provisions and the eventual delivery of justice.


The fact is that university personnel are out of their depth, rank amateurs whose only mandate is to supervise institutional function, to assure rule-based academic conduct and to teach classes. Nothing more. Title IX, especially as it has been arbitrarily applied for far too many years, involves juridical, not academic, practices. Academic administrators may facilitate a process whereby an assumedly grievous offence is referred to the police or to the appropriate courts. Anything more is beyond their competence and authority.

The “verdict” rendered by DeVos should have been a foregone conclusion: the entire pseudo-legal apparatus adopted by the university should have been unceremoniously scrapped. It has no place in the ivory tower. It should not have been tinkered with. It needed a scorched earth policy, not 2000 pages of commentary and discussion, a varnish of good will and a quote from James Madison to gussy up the whole shebang, leaving the system intact to be abused and exploited by the diversity clique and the army of feminist quasi-adjudicators. If anything, the situation is worse now than it was before DeVos began tampering with it since the reforms leave almost no possibility of the system being abolished. I doubt very much if Madison would have approved.

Betsy DeVos is a heroine among conservatives, an intelligent and engaging personality, so it is with some chagrin that I find her deposition a serious letdown. Perhaps she has made a tactical decision to disarm the vast consistory of leftist critics by retaining the overall structure of Title IX—a sop which clearly did not work. Alternatively, she really believes she has succeeded in reforming a defective and byzantine edifice of unjust rules and unexamined axioms.

Nonetheless, one expected better from DeVos, who started with high hopes and ended with disappointing concessions. Instead of taking a principled stand and ending once and for all the farce of sexual politics on university campuses by referring all matters of serious misconduct to the official venues where they belong, she effectively capitulated to the left-feminist ideological perversions that are continuing to destroy our institutions of higher learning.


Obama must be smiling.

Note: Obviously, my concern is with the situation in the universities rather than K-12, also mentioned by DeVos, although I suspect the K-12 statistics regarding sexual violence are skewed by the numbers emanating from some of the inner schools. But that is for another time.

David Solway’s latest book is Notes from a Derelict Culture, Black House Publishing, 2019, London. A CD of his original songs, Partial to Cain, appeared in 2019.