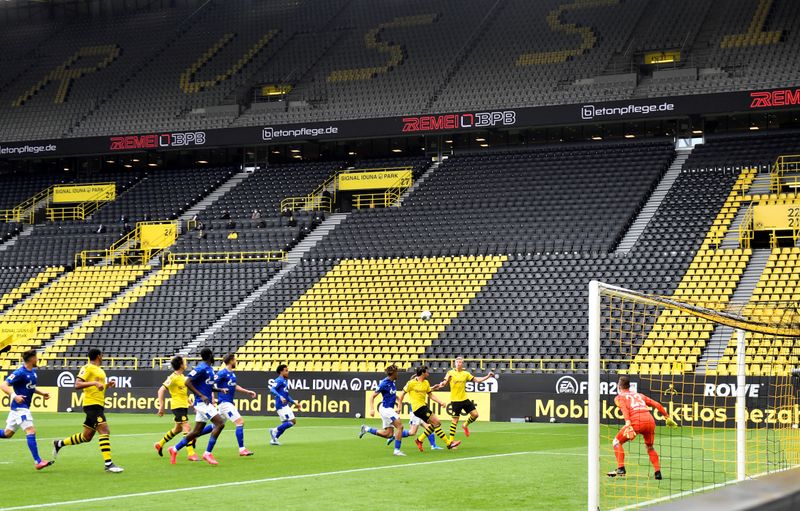 BERLIN (Reuters) – From social distancing substitutes using airport stairs, to disinfected balls and a potential television audience of one billion, the Bundesliga enjoyed a chequered restart as the first major sports league to resume amid the COVID-19 pandemic.

The German top two divisions, suspended since mid-March due to the virus, returned on Saturday, including the Bundesliga’s showcase — the Ruhr valley derby between Borussia Dortmund and Schalke 04 — as football-starved fans around the globe tuned in to watch live action.

Despite the possible global audience of a billion as predicted by Bayern Munich boss Karl-Heinz Rummenigge, and the hope it gave other sports leagues, it was not what fans had been hoping for.

Instead of the 81,000 crowd packing in Dortmund’s Signal Iduna Park, it was a mere 300 people, including players, staff, team officials, broadcasters and security personnel, as in every stadium as part of a strict health protocol.

Fans have also been banned from inside and around the venues to minimise the risk of infection.

Every shout, scream and thud of the ball bounced off the concrete tribunes and was picked up by the pitchside microphones to create a haunting atmosphere.

In Dortmund, Europe’s biggest standing tribune, the Yellow Wall stood impressively empty as the latest episode of the fiercest German football rivalry unfolded on the pitch.

The games sounded more like Sunday kickabouts or high-intensity training sessions than the return to action of highly-paid professionals in the world’s best attended football league with normally an average of about 42,000 spectators per game.

The Bundesliga is desperate to complete the season for contractual reasons by June 30.

Police were present at the grounds prior to the start in order to deter fans from gathering outside to celebrate.

“The derby without fans is a new challenge for us but equally complex as a regular game,” Dortmund police said before the game, urging fans to stay at home. “Make it easy for us and stay at home.”

They did stay away from the derby, officials said as the game got under way.

Inside the stadiums masks were mandatory for everyone apart from the players.

Teams had to change their routines completely with Leipzig having brought in a set of airport stairs to keep substitutes at a distance in the tribunes, some three metres higher up than the bench.

The Bundesliga has allowed five substitutions in total per game to cope with the lack of match practice and the congested fixture schedule.