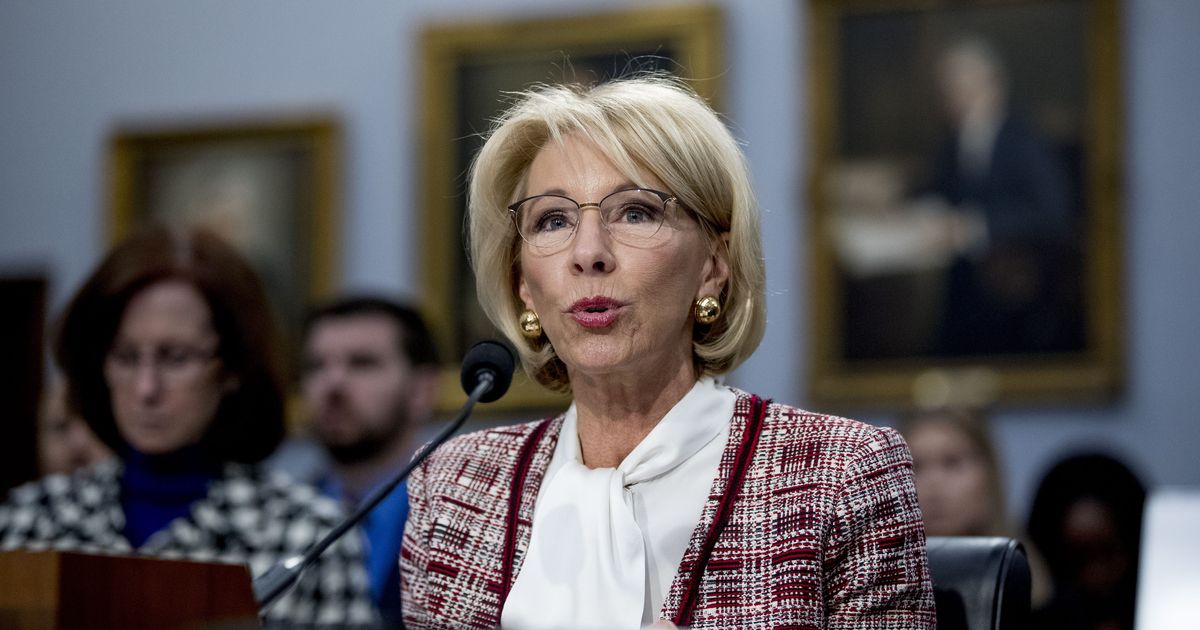 They Seem Confused About the Meaning of “Liberties”

Last Friday’s Morning Briefing led off by singing the praises of Secretary of Education Betsy DeVos for bringing some sanity and constitutional order back to college campuses:

DeVos’s most important work has been addressing the insanity that has been visited upon young men on college campuses in the past couple of decades, the most notable and infamous incident being the Duke lacrosse case.

She has been working diligently to bring rules and order to a previously arbitrary system that gave almost no rights to the accused.

Because the world has gone completely insane, the new rules that DeVos is putting in place are being objected to by a variety of leftist organizations and politicians, all of whom are grossly misrepresenting the changes.

After a week of the usual suspects complaining, the American Civil Liberties Union has wandered into the fray, filing a lawsuit to block DeVos’s new federal guidelines.

Like all of the DeVos haters, the ACLU is lying about the changes:

DeVos is Rolling Back Protections for Sexual Harassment and Assault Survivors in Schools. We’re Suing to Put a Stop to It.

This is the American Civil Liberties Union almost gleefully taking a legal stand against due process. DeVos’s revisions strengthened protections for the accused where none existed. Males on college campuses merely had to be accused to have their lives completely upended. In reality, the ACLU should have gotten involved earlier.

The organization seems to have lost all sense of its original purpose. Here’s a brief description from its site:

The ACLU has evolved in the years since from this small group of idealists into the nation’s premier defender of the rights enshrined in the U.S. Constitution.


The ACLU is apparently working from an abridged version of the U.S. Constitution, one that doesn’t have the 5th or 14th Amendments included. The arbitrary approach to which constitutional rights apply is antithetical to what the ACLU purports to stand for. As soon as the news of the lawsuit broke, social media lit up with criticism like this:

they’re a run of the mill left-wing grievance group now. their original purpose is over.

No doubt a lot of this reaction to DeVos is rooted in good old-fashioned Trump Derangement Syndrome. The rules that DeVos changed were Obama-era guidelines and, as I mentioned last week, the fact that the Trump administration is doing the changing has rubbed a lot of delicate leftist nerves raw.

The ACLU has been on the wrong side of a lot of issues in recent years, but this is beyond the pale. They want to abandon males on college campuses to the whims of far-left administrators who would have no obligation whatsoever to even listen to their side of the story.

And it certainly has nothing to do with liberties.

Latest Coronavirus Insanity: Surfing Is Allowed But Swimming Is Not


New Hydroxychloroquine Trial Could Be Destined to Fail

What Does Testosterone Have to Do With Coronavirus? Quite a Lot, It Turns Out.

Is This the Leaker in the Flynn Unmasking Scandal?

#Popcorn. Could Obama Be Called to Testify in the Flynn Unmasking Scandal?

NY City Health Commissioner to Police Official: ‘I Don’t Give Two Rats A—- About Your Cops’

That ‘Woman Governor’ in Michigan Is at It Again

Can Michael Flynn Be Sentenced Without Being Prosecuted for a Crime?

New Poll Reveals Who Americans Trust on the Economy

You May Be Unemployed, But Matt Damon is Living the Dreamy Lockdown ‘Fairly Tale’

One Health Department To Rule Them All

Is A Red Wave Coming?

#ShockedFace. Over 100 Inmates Released From Rikers Busted For New Offenses

Democrats’ Impeachment Witness Has Some Explaining to Do

The Biden Four: Did the Former Vice President Screw Over Four Americans to Get Cozier Iraq?

Every Day Biden Is Briefed on Coronavirus by Somebody, He Just Can’t Remember Who

Congressman to Whistleblower Doctor: You’re Too Sick to Go to Work But You’re Here Testifying?

Simple Question: Based on What Evidence Should Christine Blasey Ford Be Believed, But Not Tara Reade?

‘Who Runs This State? The People!’ Gov. Whitmer Led Citizen Protest Against Governor in 2012

Made in Germany: Hamburg Cafe Takes a Hilarious Approach to Social Distancing

Exercising While Masked Can Be Deadly, So Why is Eric Garcetti Insisting Upon It?

During Joint MSNBC Appearance, America Learns that Stacey Abrams Makes As Much Sense as Ramblin’ Joe

The ever-moving goalposts…Barstool Sports Founder: ‘We’re Staying Inside Until There’s A Cure? When Did That Become The Game?’

Joe Rogan: If California Continues To Be This Restrictive, I Might Have To Move To Texas

Here Is How Your Next Uber Ride Will Be Different

Report: Google Cut Back On Diversity Programs After Lawsuit By James Damore (Update)

Lock him up. Clapper: Unmasking Was So Routine To Me That I Don’t Recall Doing It To An Incoming National Security Adviser, Or Something

Drooly McMoron strikes again. Joe Biden says we’re in the middle of a pandemic that has cost millions of lives and 85,000 jobs

A new study funded by the government has revealed, shockingly, that the solution to all problems is to give more power to the government.

This handy infographic summarizes the findings of the incredible, ground-breaking study: pic.twitter.com/JEFN3MUvEX