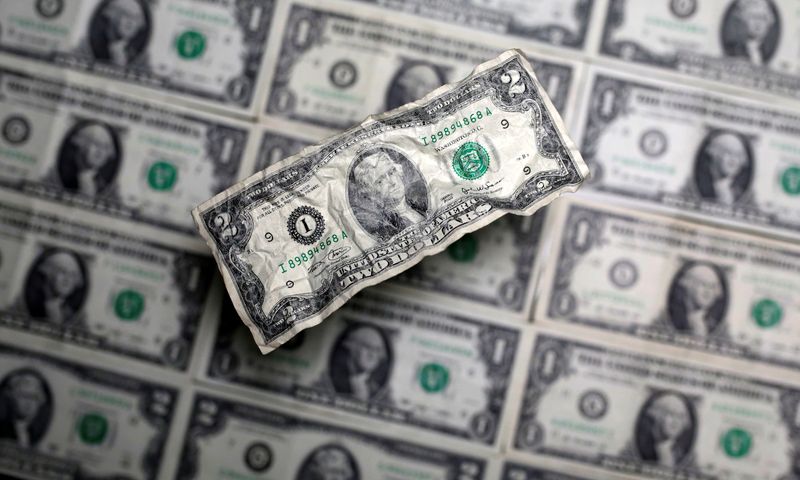 SINGAPORE (Reuters) – The dollar rose to a two-week high against major peers on Tuesday, propelled by rising U.S. bond yields and increasing safe-haven demand amid growing fears about a second wave of coronavirus infections, which sent riskier currencies lower.

The biggest loser was the Australian dollar, which dropped about 0.8% to a one-week low, while the kiwi extended falls.

The euro <EUR=> fell below $1.08 for the first time in almost a week and the Japanese yen nursed an overnight loss of about 1% to sit at to 107.48 per dollar, the bottom end of a range it has kept since mid April.

The greenback was buoyed by a steepening U.S. yield curve, as Federal Reserve officials talked down the prospect of negative rates, and as the bond market braces for an immense borrowing spree from the U.S. Treasury.

At the same time, progress on plans to re-open economies has been overshadowed by worries about fresh infections of COVID-19 as easing of restrictions in South Korea and Germany were soon met by spikes in new cases there.

“It’s a little bit of yield support (for the dollar) and a general return of nerves,” said Westpac FX analyst Sean Callow, as April’s surge in riskier currencies fades away.

“Our base case has been for a while now that the risk bounce was overdone, we just don’t think (recovery) is going to be a straight line.”

The dollar has closely tracked investors’ risk aversion through the coronavirus crisis. However, rising longer-tenor yields as Washington prepares to borrow some $3 trillion this quarter have added some carry-trade attraction to the currency as well.

Against a basket of currencies <=USD>, the dollar hit a two-week high of 100.440, near the top end of the range which has held it for more than a month.

Ten-year U.S. Treasury yields rose above 0.7% for the first time in a week overnight and held at 0.7099% in Asia, while two-year yields also kicked up after Atlanta Fed President Raphael Bostic said he is “not a big fan” of negative rates.

After punching above its 100-day moving average on Monday, the Aussie <AUD=D3> retreated and slipped to $0.6432 on Tuesday following a report that China had suspended some meat imports from Australian abattoirs.

The unconfirmed report in The Australian newspaper, citing unnamed industry sources, was vague about the reason but comes as tension over the origin and handling of the coronavirus chill relations between Australia and its biggest trading partner.

Besides virus headlines, markets are looking to Chinese consumer inflation data due at 0130 GMT, where an annual rise of 3.7% is expected, according to a Reuters poll of economists.

Fed officials James Bullard and Patrick Harker are due to make remarks at 1300 GMT and 1400 GMT, respectively, ahead of a highly anticipated speech from chairman Jerome Powell on Wednesday.