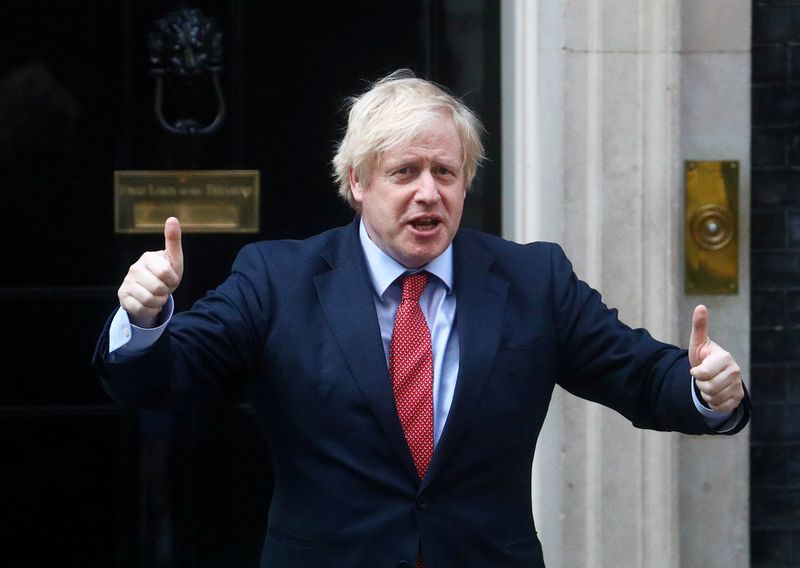 FILE PHOTO: Britain’s Prime Minister Boris Johnson reacts outside 10 Downing Street during the Clap for our Carers campaign in support of the NHS, following the outbreak of the coronavirus disease (COVID-19), London, Britain, May 7, 2020. REUTERS/Hannah McKay/File Photo

LONDON (Reuters) – British Prime Minister Boris Johnson will set out a five-tier warning system for the coronavirus in England on Sunday when he outlines the government’s plans to begin slowly easing lockdown measures, British media reported.

Johnson is due to use a televised address at 1800 GMT to announce the next steps in Britain’s battle against the pandemic following a lockdown that has all but shut down the economy and kept millions at home for nearly seven weeks.

Media reported Johnson would detail a five-tier warning system for England, ranging from “green” at level one to “red” at level five to flag the COVID-19 risk in different areas and to allow the government to increase restrictions where necessary.

The United Kingdom’s other constituent nations – Wales, Scotland and Northern Ireland – have some powers over their own lockdown measures but are expected to stay broadly in line with what the government announces for England.

Colour-coded systems to distinguish regions with more or less risk have been used in other countries as they emerge from lockdowns, including France and India.

Britain has reported 31,587 deaths from the coronavirus, the second highest death toll in the world after the United States.Transport minister Grant Shapps said on Saturday there would not be any dramatic changes to the lockdown.

Johnson is expected to say people will now be allowed to leave their homes to exercise more than once a day and that garden centres – selling plants, seeds and garden equipment – can reopen.

“This is the dangerous bit,” Johnson told the Sun on Sunday newspaper. “We’re past the peak now but we’ll have to work even harder to get every step right.”

“Mountaineers always say that coming down from the peak is the most dangerous bit. That’s when you’re liable to be over-confident and make mistakes.”

Media reported that the government would change its “Stay at home” slogan to “Stay alert”, as those who cannot work from home will begin to be encouraged to return to offices and factories, as long as strict social distancing rules can be followed.