Betsy DeVos Brings Back Due Process and Libs Lose It 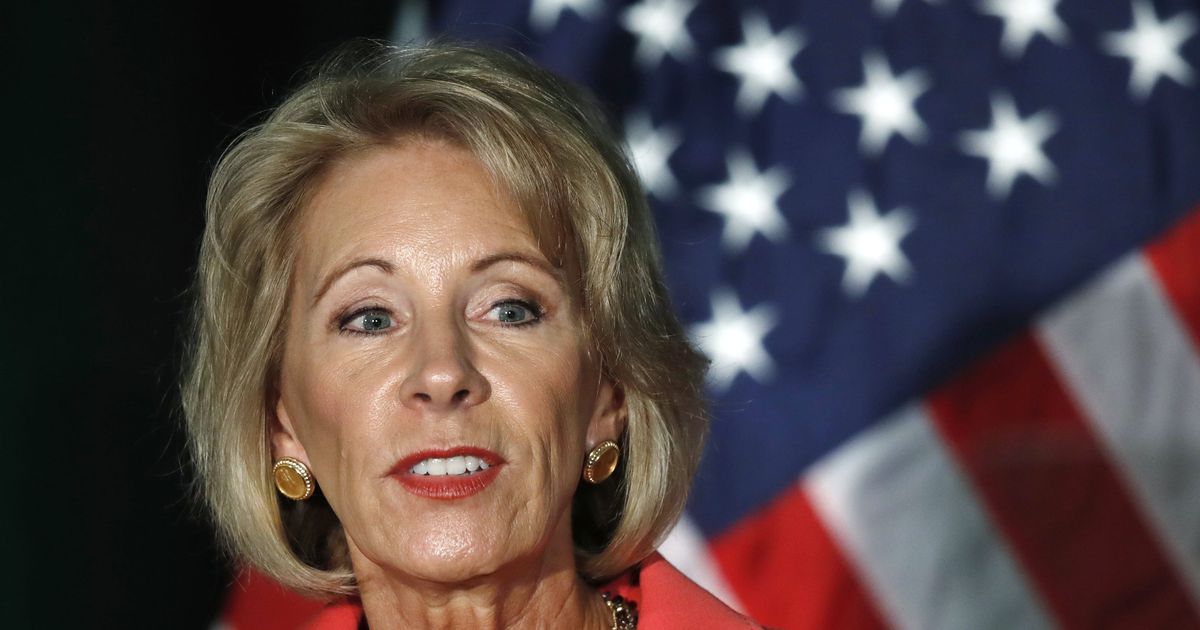 Much has been made the past few years about the turnover and turmoil in the Trump administration. People come and people go, often at a rather blinding pace. Personally, I’m fine when bureaucrats don’t linger in their jobs. The revolving door in this administration sometimes seems more like a feature than a bug.


There has been one shining constant throughout, however. Secretary of Education Betsy DeVos has been a perpetual thorn in the sides of liberals since she was first confirmed in 2017 and it’s always glorious to watch.

DeVos is everything the awful liberal public education pimps hate, which is what makes her so likable. She’s rich. She’s a lifelong Republican. She has long been a champion for school choice, which makes their heads explode.

The Democrats fought to keep her from being confirmed, and Vice President Pence had to cast the tie-breaking vote.

DeVos’s most important work has been addressing the insanity that has been visited upon young men on college campuses in the past couple of decades, the most notable and infamous incident being the Duke Lacrosse case.

She has been working diligently to bring rules and order to a previously arbitrary system that gave almost no rights to the accused.

Education Secretary Betsy DeVos on Wednesday issued final regulations on sexual misconduct in education, delivering colleges and schools firm new rules on how they must deal with one of the biggest issues that have roiled their campuses for decades.

The rules fulfill one of the Trump administration’s major policy goals for Title IX, the 48-year-old federal law that prohibits sex discrimination in programs that receive federal funding, bolstering due-process protections for accused students while relieving schools of some legal liabilities. But Ms. DeVos extended the reach of the law in other ways, establishing dating violence as a sexual misconduct category that must be addressed and mandating supportive measures for alleged victims of assault.


DeVos is bringing clarity to the vague Obama-era “guidance” that created a situation in which college administrations felt compelled to “to side with accusers without extending sufficient rights to the accused.”

When Ms. DeVos announced in 2017 that she was rescinding the Obama-era guidance, she said she would give schools, from kindergarten to college, regulations with the force of law that balanced those rights. Her final rules, which she called a “historic” break from the “kangaroo courts” of the past, take effect Aug. 14.

Our new #TitleIX reg codifies into law sexual harassment as the discrimination it is. Before now, it was only addressed through Dear Colleague letters. We owe students more than letters and good intentions. We owe them accountability through the law. pic.twitter.com/SHFg36K24E

Liberals are aghast that DeVos has brought fairness to a previously nightmarish situation. Rather than objectively assess the new rules, they’re miffed that their least favorite Cabinet member dared touch something that The Lightbringer instituted.

Crazy Joe the Wonder Veep has vowed to undo DeVos’s changes if America hits the toilet and elects him president:

Democratic presidential nominee Joe Biden promised to repeal the recent change in Title IX rules that reestablished due process for those accused of sexual assault on campus, saying that women deserve “to have their voices heard, their claims taken seriously and investigated, and their rights upheld.”

That’s an insane mischaracterization from an even more insane man. It’s also doubly laughable given the fact that he and everyone who supports him are actively trying to shut up a woman who’s accused him of sexual misconduct.

What DeVos has done should be universally praised. The lunatics on the Left who are opposed to her would rather every young male in America have no rights whatsoever.

They need to be kept away from, well, everything.

I Worry About What They Replace Him With

My Friday column: At What Point Do the Democrats Get Rid of Joe Biden?

Just How Long Will It Take for the Economy to Recover From Coronavirus?

They lied about everything else so…Obama Officials Had No ‘Empirical Evidence’ of Trump-Russia Collusion, Intel Transcripts Show

Do Democrats Really Want to Celebrate the FBI’s Heinous Abuses Against Mike Flynn?


After His Self-Righteous Flynn Tweet, Someone Should Check Jim Comey for Burn Marks

Game. On. Trump Warns a ‘Big Price Should Be Paid’ by Obama Administration for Targeting General Flynn

Yeah…no. De Niro: Cuomo Is a ‘Very Capable Backup’ If ‘Something Would Change’ with Biden, ‘God Forbid’

The governor should have done it. Supreme Court of Texas Orders Salon Owner Shelley Luther’s Release From Jail

CDC Guide for Reopening the Country ‘Shelved’ by Trump Administration

Democrats are OK with this continuing. A Staggering Number of American Workers Has Now Filed for Unemployment

EU Heading For Worst Recession in History. What Does That Mean For the U.S.?

About Those Swastikas and Nooses at the Michigan Lockdown Protest…

Tara Reade to Joe Biden: ‘You Should Not Be Running on Character’


Everything You Need to Know About the Left in One Headline

Here’s the Left’s End Game: Feminist Theorist Wants to Use COVID-19 to ‘Abolish the Family’

The Kruiser Kabana Episode 35: What If the Democrats Win Everything?

I Got a Black Market Haircut and I’m Not Sorry

VodkaPundit, Part Deux: The Second Cold War: Oops, We Did It Again

How Free Do You Want to Be?

Crackdowns on Protests Will Only Backfire On Officials

Biden’s Latest Virtual Event Was the Worst One Yet


Colorado Business Owner Opens in Violation of the State Order, and She’s Ready to Go to Jail: ‘It’d Be Worth It’

Kira Davis: The One Act of Heroism We Never Acknowledge Is the Nuclear Family

Ban Canada. Canadian Gun Laws Are so Strict That They Manage to Ban a Coffee Company

Some Good News: The Rate Of New Positive Cases Is Declining

Clever Inmate Escapes From Jail With A Surgical Mask

Gonna leave a MARK! James Woods nut-punches Andrew Cuomo with his own tweet about ‘government competence’

Can’t make this UP! Chuck Schumer out-GASLIGHTS even himself in tweet accusing GOP of delaying ‘help in this crisis’

As Waymo resumes self-driving tests, backup drivers are still worried about the virus

Art from the artist DANK pic.twitter.com/9hfZThUQhz

Still in a Cheers mood.