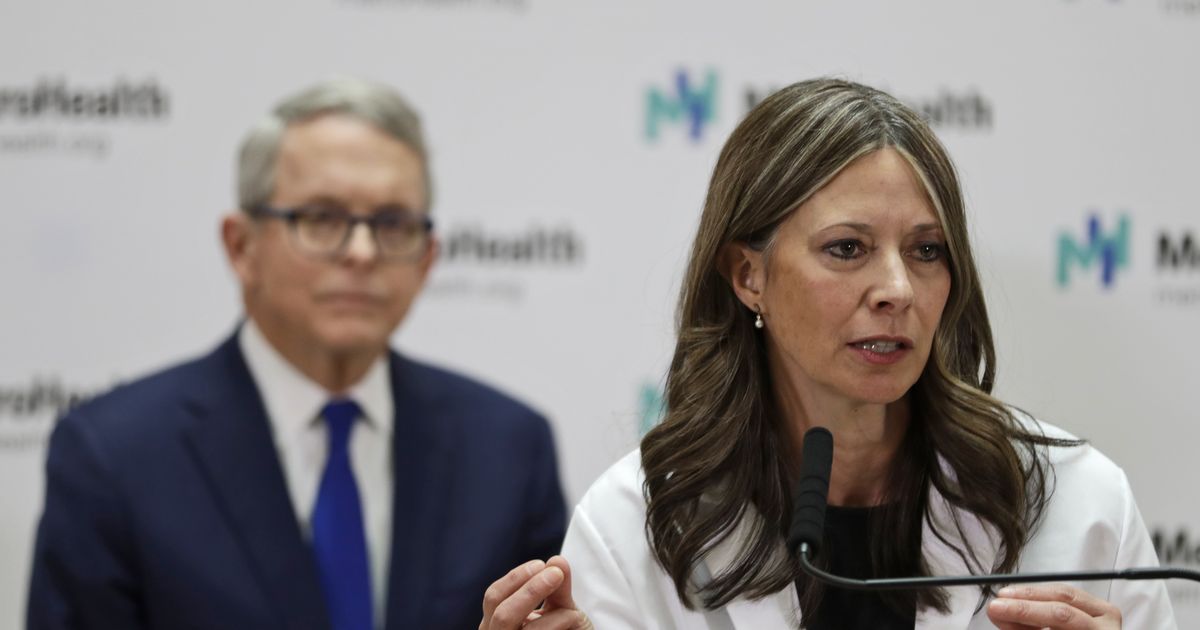 The Ohio House on Wednesday passed a bill stripping the state health director of some emergency powers and limiting stay-at-home orders to 14 days, requiring the approval of the legislature for an extension. Gov. Mike DeWine, a Republican who’s been basking in the praise of Democrats for his heavy-handed approach to containing the coronavirus pandemic, has vowed to veto the bill.


SB 1, which originated in the state Senate, was designed as a measure to reduce regulations in the state. When the House got its hand on it, they added language curtailing the powers of the state health department and altering the language of an archaic 1908 rule passed to deal with a tuberculosis epidemic, which has remained largely unchanged since then. Ohio Revised Code 3701.13 currently states:

The department of health shall have supervision of all matters relating to the preservation of the life and health of the people and have ultimate authority in matters of quarantine and isolation, which it may declare and enforce, when neither exists, and modify, relax, or abolish, when either has been established. [emphasis added]

DeWine, through health director Amy Acton, has used this statutory power to issue sweeping orders, shuttering businesses and ordering Ohioans to stay at home during the COVID-19 crisis. DeWine has defended Acton and warned Ohioans that criticism of her is out of line. “I’m the elected official,” he said. “I’m the one who ran for office. I’m the one who makes the policy decisions. The members of my cabinet, Dr. Acton included, work exceedingly, exceedingly hard, but I set the policy.”

But whether he likes it or not, DeWine has no authority to issue emergency health orders — Acton and Acton alone does, which is why all his edicts are funneled through her office.

[Aside: Acton shocked pro-life groups in the state last year when it was discovered she helped abortion provider Martin Haskell, who claims to have invented partial-birth abortion, get his operating license back after he lost it for failing to have a state-mandated transfer agreement in place with a hospital. After Haskell lost two appeals to the Ohio Supreme Court, Acton stepped in to not only get his operating license restored but to grant him a variance so he doesn’t have to comply with Ohio’s transfer agreement law in defiance of the Supreme Court. That’s who DeWine has running his COVID-19 response.]


The legislature voted on Wednesday to roll back Acton’s sweeping powers and asserting the legislature’s role during a state emergency.

(C)(1) No order of the department shall be effective for a period exceeding fourteen days, except with the approval of the joint committee on agency rule review, as described in section 101.36 of the Revised Code. For purposes of this division, an order is considered to be effective for a period exceeding fourteen days if the order includes an effective period that exceeds fourteen days or if the substance of the order is contained in multiple subsequently issued orders whose combined effective period exceeds fourteen days. (2) The department may adopt rules under this section only in accordance with Chapter 119. of the Revised Code, and the department shall not adopt an emergency rule, make an emergency amendment to a rule, or rescind a rule on an emergency basis under this section, as described in that chapter.

If Acton, or a future health director, wants to extend an emergency order beyond 14 days, she’ll have to get the approval of a joint bipartisan legislative committee.

DeWine’s office told reporters on Wednesday that should the bill make it to his desk he will veto it. It does not appear at present that the House would have enough vote to override a veto. The Senate has yet to take up the measure.

“My administration is focused on the important things we need to do to help businesses responsibly reopen while protecting Ohioans’ health and safety,” DeWine said in a statement. “This week alone, this included increasing coronavirus testing and tracing, balancing Ohio’s budget, and working on plans to move Ohio’s economy forward. Ohioans need their legislators focused on these important issues. Creating more uncertainty regarding public health and employee safety is the last thing we need as we work to restore consumer confidence in Ohio’s economy.”


In other words, the governor has no intention of relinquishing the power he and the unelected health director have amassed. If that power is taken away, what will he and Acton have to talk about at their incessant, mind-numbing “Wine with DeWine” daily press briefings?

Ohio citizens and lawmakers alike have been critical of DeWine’s overreach during the pandemic. The state has been under a stay-at-home order since March, and while there are plans to begin reopening the state this month, the stay-at-home is still in effect. As of Wednesday night, the state has seen just over 20,000 confirmed COVID-19 cases, with 4,052 hospitalizations and 1,114 deaths. Nearly one-third of those deaths have been clustered in nursing homes. Twenty percent of the COVID-19 cases have occurred in the state’s prisons.

While DeWine and others are patting themselves on the back for flattening the curve of the virus, others insist that DeWine and Acton went overboard, relying on faulty models—which they refuse to release to the public. At one point Acton was predicting 100,000 deaths as a result of the coronavirus. She later backtracked, admitting that the number was merely a “guesstimate.”

Rep. Scott Wiggan, a Republican who co-sponsored the House version of SB 1, has been critical of the DeWine administration’s response. Last week he accused Acton of “moving the goalposts” after the state had flattened the curve. After Wednesday’s vote, he wrote on Facebook, “Today, 58 members of the Ohio Houe of Representatives voted to represent the citizens they serve even in a time of crisis. Sub. Senate Bill 1 will give a voice to millions of Ohioans that want input into the decisions and lives.”


Rep. Nino Vitale, also a Republican, has been one of the harshes critics of DeWine and Acton. On May 1 he wrote, “While you were sleeping, UNELECTED Acton declared Ohio closed until May 29th. Now when you go to bed at night, you have NO IDEA what your rights will be when you get up in the morning. Is this America or Amerika?”

He urged the legislature to do their jobs and “vote on all these unconstitutional orders that defy your liberties and freedoms!”

Republican House Speaker Larry Householder issued a statement blasting DeWine for shuttering small businesses. “There is a tremendous amount of frustration from the majority of members in the Ohio House regarding the Administration’s unwillingness to recognize that small businesses that have much less daily traffic in their stores are closed while their large chain competitors have been open throughout the process,” Householder said. “As long as small retailers continue to be shut down while national chains are allowed to remain open, government is assisting in the demise of many great small businesses. The big get bigger and the small go away.”

He said calls by the legislature to work with the governor’s office “have been met with deaf ears.”

“Ohio’s three branches of government are to be separate but equal,” he said. “Our members feel disrespected that their opinions have been largely disregarded by the Administration”

“I don’t know of anybody, any reasonably minded person, someone that could be elected by their fellow people, their peers back in their district, why anybody reasonable wouldn’t agree with reasonable orders,” Householder told WOSU Public Media. “And so I don’t see it in any way affecting what the governor trying to do. I commend what the governor has did so far. But I think there has to be legislative oversight.”

The House also passed a bill on Wednesday decriminalizing defiance of public health order and reducing the fine for refusal to follow such orders from $750 to $150. Both bills now go to the Republican-controlled Senate.