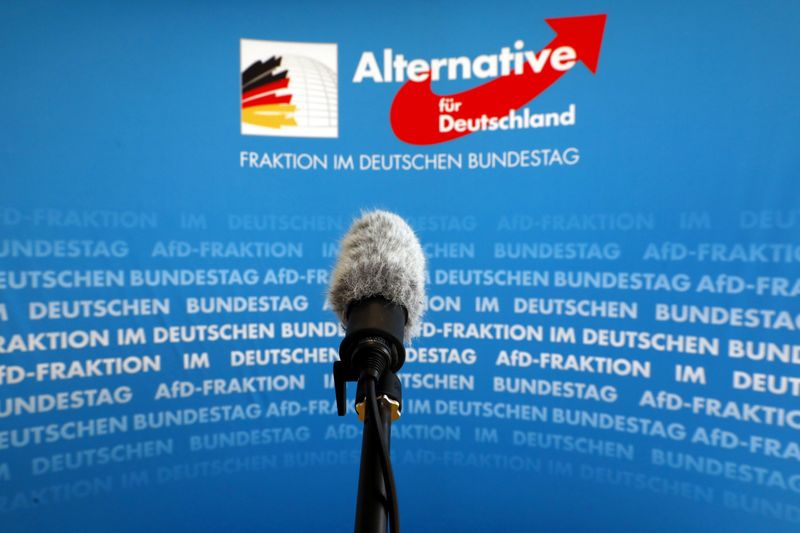 FILE PHOTO: A microphone stands in front of an AfD (Alternative fuer Deutschland) logo on the press wall of the German Bundestag in Berlin, March 12, 2020. REUTERS/Michele Tantussi/File Photo

BERLIN (Reuters) – The far-right Alternative for Germany (AfD) has suspended a spokesman after he suggested in an email exchange that the term “fascist” was used too freely, an AfD lawmaker said on Monday.

The suspension of Christian Lueth is likely to deepen a crisis in the AfD triggered by the domestic intelligence agency’s decision last month to step up monitoring of a radical wing within its ranks, and suggestions by one of its co-leaders that a split is needed to purge the party of extremists.

“Lueth referred to himself as a ‘fascist’ in email correspondence with a female (job) applicant,” an AfD lawmaker said on condition of anonymity, confirming allegations first reported by Die Zeit magazine.

The lawmaker said he had not seen the emails but had been briefed about them by a colleague involved in reviewing the incident for the parliamentary group, which has the final say on whether to fire Lueth.

Lueth did not respond to a request for comment.

The email exchange had centred on Lueth’s grandfather Wolfgang, the German navy’s most successful submarine captain in World War Two, who was awarded Nazi Germany’s highest military honour by Hitler.

“In one of the exchanges, Lueth wrote to the woman: ‘If my grandfather was a fascist then I would be a fascist too,’” the AfD lawmaker said.

The lawmaker said the woman involved in the exchange was a member of the Werte Union, or Values Union, an ultra-conservative grouping in Chancellor Angela Merkel’s conservative bloc, who had applied for a job with the AfD.

Support for the AfD has fallen by 3-4 percentage points since the BfV intelligence agency last month increased monitoring of an ultra-right-wing faction of the party called Der Fluegel (“The Wing”) – which it designated as an extremist entity that is a threat to democracy.

The decision increased tensions within the party, culminating in a reprimand for co-leader Joerg Meuthen for saying it should split and expel Der Fluegel as the only way to build a broader support base.

The AfD also seems to be losing support over its criticism of social distancing measures introduced by the government to slow the spread of the coronavirus, which have broad support among Germans.

The party says the measures are causing more harm than good because of the heavy toll they are taking on the economy.