Trump Rolls the Media Again, This Time About Disinfectants

President Trump has done it again…like clockwork. As I’ve opined before, there seems to be a little battle drill that he likes to execute on occasion. It goes something like this. First, early on in the week he makes some “outrageous” statement or comment. Of course, the chattering class…media, pundits and politicians of all stripes rush to decry his remarks. These oh, so smart people usually use the same terms to badmouth the President—Racist! Unaware! Imbecile! I’m sure our Read State readers can come up with many more.

This usually continues for a few days, sometimes as long as a couple weeks. Then something magical happens. To very little fanfare, actually most often to no public (media) recognition at all, President Trump is proven correct, at the very least, nowhere near the blithering idiot the Left likes to make him out to be. More often than not, the concept or idea he is commenting about in his own, very Trumpian manner, is not only valid, but actually being tested or even in use. The Left, while publicly ignoring that “new” information, privately wonder how they got flummoxed yet again.

Salena Zito, a CNN political analyst, and a staff reporter and columnist for the Washington Examiner figured a big piece of this out back in 2016. She famously said of President Trump, “The press takes him literally, but not seriously; his supporters take him seriously, but not literally.” This is important…and therein lies the rub my friends. The left still hasn’t figured it out.

This week, Her Majesty, Queen Teresa and I watched this play out yet again. President Trump during his nightly briefing had a senior staffer give a short brief on the effect of sunlight, warm temperatures and high humidity on the Wuhan Virus. William Bryant a senior official at the Department of Homeland Security outlined some research his agency had done indicating that the Wuhan Virus was very susceptible to direct sunlight, heat and high humidity, all of which President Trump had mentioned weeks ago to loud media derision and flat out nasty commentary from the left. 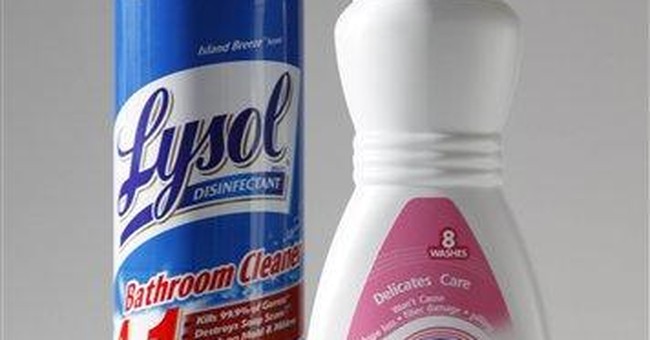 The President then mentioned, in his “think out loud” manner, that perhaps the experts could look into use of Ultra Violet inside the body or trying to disinfect the body from the inside by finding some substance that might do that. Note: At no time did President Trump recommend or even suggest, using disinfectants such as Lysol (TM) injected into the body. He was describing a concept. He was actually, for all of the folks out there who like to screech “SCIENCE!” at the top of their lungs, executing the very first step in any scientific inquiry—asking the question, “What if?”

Of course, we’ve all seen and heard the nasty comments and Facebook (TM) memes out there claiming that President Trump recommends injecting oneself with Lysol or Isopropyl Alcohol. Of course that isn’t true. But, here folks, is where it gets really good.

Her Majesty and I, having nothing better to do being quarantined and all, were discussing this latest brouhaha and how it appeared to be following the same old script. I then proposed a friendly wager. Knowing how this usually works out and that President Trump usually, already has the answer to the question (sunlight) before he “spouts off,” I asked her what was her bet, time-wise on how soon information would come out that once again Trump was correct regarding the concept of disinfecting from inside. Her response was ”3 weeks,” which I thought a bit long. Mine was (going to be) 2 weeks, as I still had the ‘sunlight” timeline in my head. Alas, I got off onto another subject before we formally shook hands…bad move on my part.

Well, I’ll be damned if it wasn’t two days…counting yesterday…TWO DAYS! It turns out that disinfecting from the inside isn’t some product of the President’s fevered imagination. The first thing that came to mind when I started thinking about it, was chemotherapy, where we poison the patient in hopes that the poison will will kill cancer before it kills the patient. But there is actually a procedure that uses hydrogen peroxide….you know, the substitute for mecurochrome for treating (disinfecting) skinned knees? Well it turns out there is an intravenous technique used to kill internal bacteria and viruses using that common solution. Over at American Thinker, Andrea Widburg explains.

Read: Trump’s idea for “disinfecting” people to fight disease is already being done

Like the author, neither I, Red State nor PJ Media are endorsing any medical technique including this one, to deal with Wuhan Virus. The point is to show that once again, Donald J. Trump isn’t anywhere near the blithering idiot the left tries to make him out to be. Nay, he is usually light years ahead of the folks who continually badmouth him. And they still haven’t learned. Trump used the scientific method properly, by starting with the first step by asking, “What if we could…?” Turns out we can.

We deplorables, the ones in flyover country, along with some fellow travelers in former Democrat strongholds, understand his plain way of communicating. This November, we folks who take him seriously (instead of literally) with some extras who took the President up on his, “What do you have to lose?” along with even more converts, are going to be back to the polls to flip the lever for him. One of the reasons, is what we just saw play out this week.

Sadly, I failed to place a bet, so Her Majesty won by default. I’m cooking dinner all this week.