I write this from the comfort of my own home; A home that now houses my workspace. It’s actually very convenient. I have more personal time as well as money due to the elimination of travel. Telecommuting certainly has its perks.

That statement is said by people who get the luxury of being able to pack up their office and take it home. People who don’t actually have business expenses. People who haven’t actually considered that businesses pay rent, too, for the spaces they are in. They don’t understand how difficult it is to catch back up from an extended period with no volume.

It’s oblivious. It’s tone deaf. It’s even willfully sociopathic to refuse to understand someone else’s struggles, and call them stupid as they lash out in angst while their life quickly circles the drain. “You just want people to die,” they say to people who are losing everything before their eyes.

It’s a newer and more sadistic form of Class Warfare that is pushing many people’s heads below water, and being told it’s for the greater good.

I’ve found that many of the same people shouting shut it down were also the most in shock about the skyrocketing unemployment numbers, as if they can’t see 3ft in front of themselves. The remedy? Ignore it, apparently. Once the shock subsides, put your head back in the sand.

There’s no silver bullet or a magic answer here. No happy compromise exists. The one size fits all approach is leaving people in the dust, and into despair and poverty. The new working elite wave at them and shout “We’re all in this together!” as they fall out of sight and mind. It has the same creepiness factor of humming a lullaby while you smother someone with a pillow.

Not only the lack of empathy, but the outright contempt of people who are on the verge of losing everything, hoping for a return to normal, is unbelievable. It’s what happens when the notoriously envious become the privileged working class through special papers.

It wasn’t so long ago that the goal was to #FlattenTheCurve to prevent hospitals from being overrun. Now the goal is undefined. Now the goal seems to be holding out for a cure. But the cure will be worse than the disease when all is said and done, as we forsake people falling into poverty, telling them to shut up, and then looking the other way.

The judgement of who is Essential and who isn’t appears to be skewed. Snohomish County in Washington State had the very first reported COVID-19 case in the United States. After mounting frustrations, the Snohomish County Sheriff Adam Fortney took to Facebook yesterday and wrote a lengthy critique of the Governor’s inaction in getting the economy going again, as well as his curious selection of who can work and who can’t.

“Our Governor has told us that private building/construction must stop as it is not essential, but government construction is okay to continue.  So let me get this right, according to the Governor if you are employed or contracted by the government to build government things you can still make a living for your family in spite of any health risk.  If you are a construction worker in the private sector you cannot make a living and support your family because the health risk is too high. This contradiction is not okay and in my opinion is bordering on unethical.

As I arrive to work at the courthouse, I see landscapers show up each day to install new landscape and maintain our flowerbeds. How has Governor Inslee deemed this essential work? However, a father who owns a construction company and works alone while outdoors is not allowed to run his business to make a living to provide for his wife and children? How has Governor Inslee deemed thousands of Boeing employees who work inside a factory building airplanes essential? But building residential homes is not essential? If a factory with 20,000+ employees each day can implement safe practices to conduct normal business operations, I am entirely confident that our small business owners and independent contractors are more than capable of doing the same.”

He also stated in this post that he had not yet enforced any Stay at Home orders, and stated he would not do so going forward.

Sheriff Fortney isn’t the only person to recognize the disparity. People across America are feeling it. And they know exactly who to be mad at.

President Donald Trump recently declared that he had total control, and was the sole decision maker in reopening the economy. State Governors immediately took exception, publicly declaring that they were in charge of reopening their states. Trump immediately backed off having set the trap, which didn’t take long to spring. Protests have popped up around the country in front of State Capitol buildings.

Yet, the people who are still financially comfortable have no idea why these people are protesting.

In a now deleted Tweet, Tony Posnanski, who makes a living selling stick figure drawings on eBay, wrote in a tone deaf tweet to Matt Walsh: 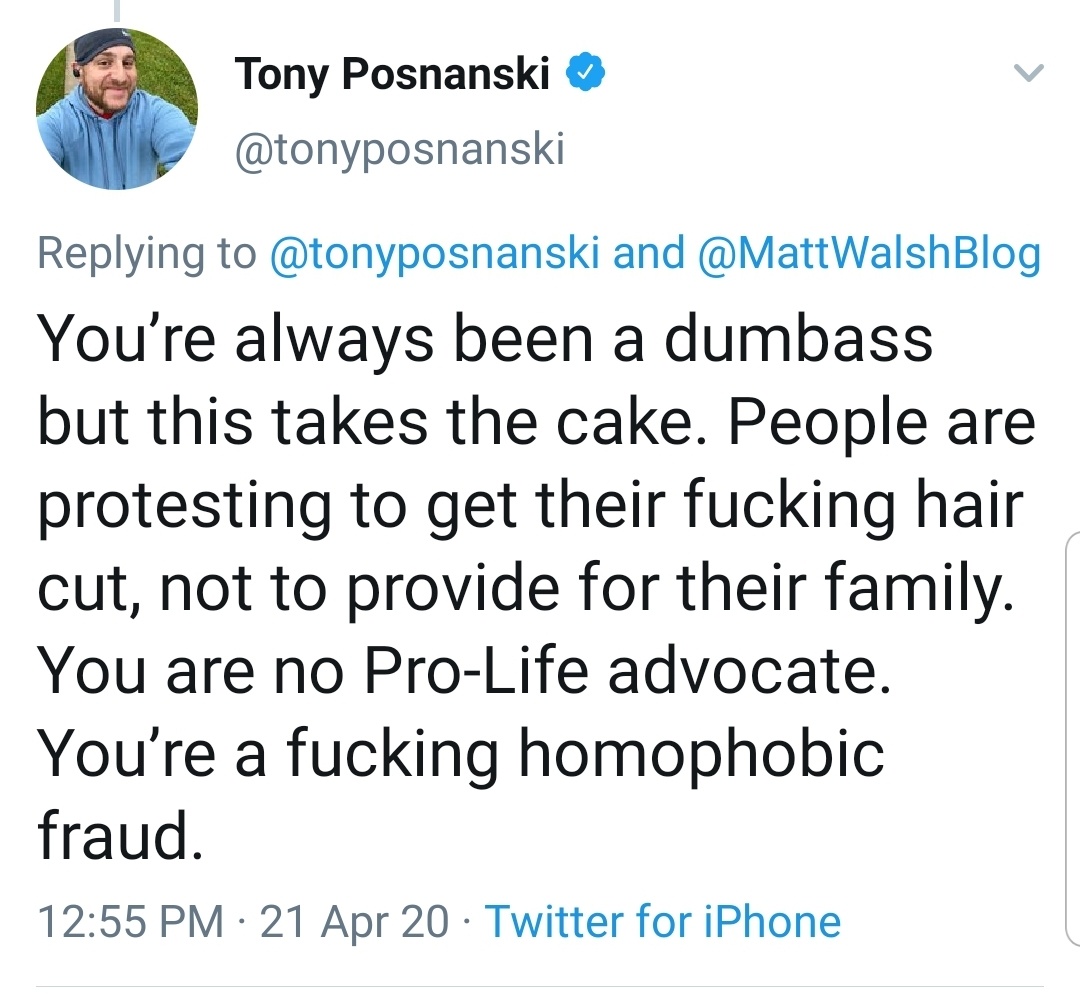 And of course, the ad-hominems. You can never forget those.

You can’t undraw that line. We see you for who you are.