You would think this mirrored a scene from Gran Torino, but it’s much more reminiscent of a film you’ve probably never seen called The Harimaya Bridge.

The prejudice was admittedly poorly explained, relying on WWII anti-Japanese sentiment that hardly exists anymore in the modern America setting in which the film took place.

While it’s ultimately a feel good movie of growing beyond your prejudices, the movie tackled a concept no other movie really has. Yes, African Americans can be racist.

We’ll get back to my personal anecdote a little bit later.

You’ve probably heard that it’s impossible for African Americans to be racist. You’ll find this claim in sources like The Black Agenda Report, or Pambazuka, or DiversityInc, or Swamp, or Elite Daily, and the list goes on.

You say potato, I say bullshit. There’s no such thing as identity immunity.

People have criticized President Trump for calling the Coronavirus the Chinese Virus, stating it will lead Trump supporters to commit hate crimes against Asian Americans. Yet, many of these documented instances following the COVID-19 outbreak are being committed by a demographic that polls very low in approval for President Trump. African Americans.

And despite what people believe or tell themselves, these acts are actually very racist.

In the below video, originally posted by Florida rapper 1K Johnny, we see an African American chasing an elderly Asian woman with hand sanitizer telling her she needs to sanitize her ass.

A Chinese woman was attacked in a New York City Subway for wearing a face mask.

Twitter user @X_Ginko, who was a witness to the subway attack, elaborated via Twit Longer:

“I will state only what I saw:

I was walking up a narrow stairwell with a large number of people. At the top of the stairwell, there was a woman sitting donning a face mask, sunglasses, and a large jacket (ostensibly to protect against 2019-nCoV). She was telling people to move to the right and letting them know she was there. I walked away from her because I wasn’t bothered by it.

When I exited the turnstiles, I saw that a man was talking to her. At think point, I was still wearing my headphones, so I couldn’t hear what he was saying. However, when I took off my headphones, I clearly heard the words “diseased bitch.” I also heard her asking him to go away.

At this point, I saw this interaction I instinctively reached for my phone in case something were to happen. As I was doing this, I kept watching what was happening. The man suddenly got very close to the woman’s face. I’m not sure why. He then hit her on the head with an audible sound. At that point, I had finally gotten my phone out and started recording. I started recording right when he was walking away, hoping to get a good shot of his face so I could help report the incident if the victim wanted.

What I didn’t expect was for the victim to chase after him. She was holding a glass bottle, seemingly in an attempt to attack or throw it at him. This is then the guy started attacking her. So ultimately, both parties had a fault, but the situation escalated with racial tension. I’m not sure if the woman was Asian or not, she was wearing a face mask and glasses, so I couldn’t tell. All I know is that she threw the bottle on the ground and was very antagonistic to everyone around her after the conflict. I then left the station after telling the MTA station worker to call help if needed.

I don’t have any other material of the incident, but I can say with complete confidence that everything I’ve stated is what I recall seeing. Whether she was drunk or not, I do not know. She could have been mentally ill, could have been drunk, or she could have just had a bad day. I do not know her and therefore I don’t think it’s correct to make any decisive assumptions about her.”

In San Francisco, an Asian man was robbed of the recyclables he was collecting to turn in for money. He was taunted and assaulted, and the man behind the camera could be heard saying “I hate Asians.”

please share this with your friends & family. this is so low, the older man was just trying to make ends meet for his family. he didn’t deserve this. this is ignorant, inhumane, & sickening. i’m praying for this man and his family. if you have any information, please reach out. pic.twitter.com/545xHFwPm4

An African American teen girl attacked an Asian woman on the bus with an umbrella, and used anti-Asian slurs against her. 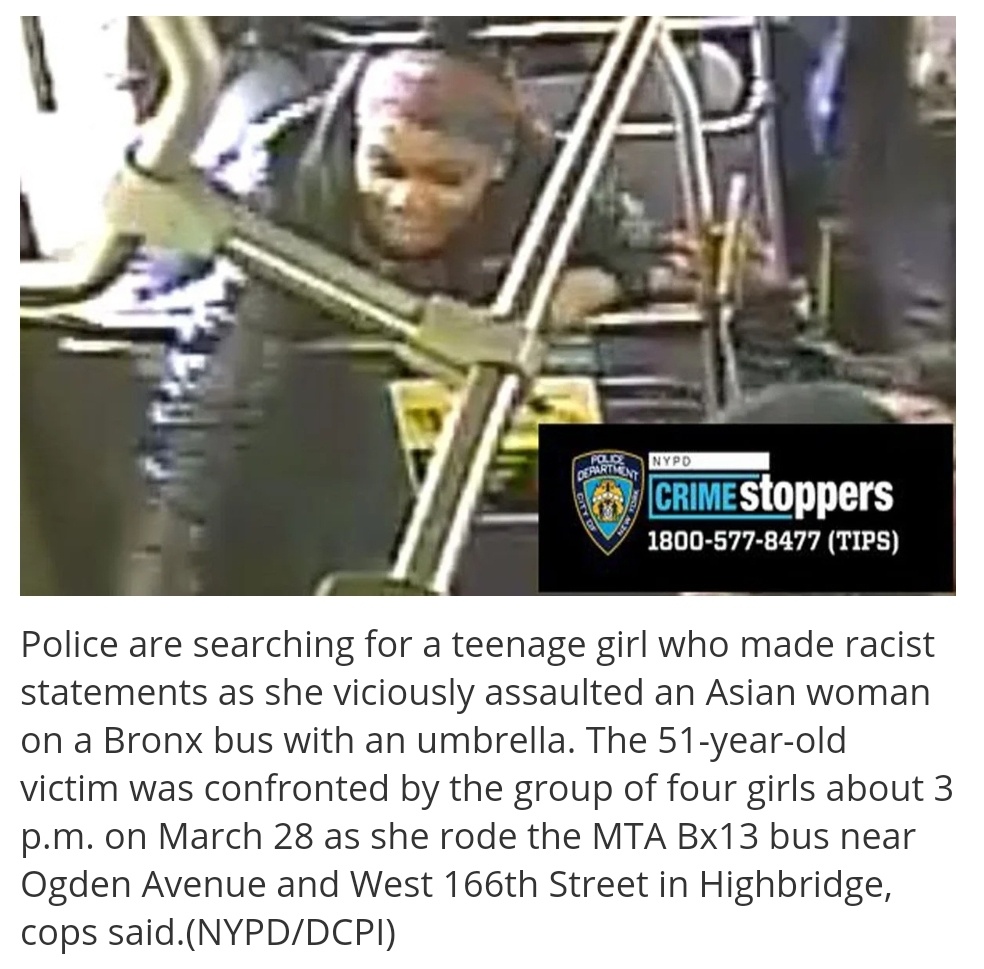 An African American adult male attacked an Asian man on a subway with Febreeze.

All of these instances are exceptionally racist. It doesn’t matter who commits them, or if they feel they’re beyond reproach where identity politics are concerned (as heavily cited in the beginning of this article).

I know it’s not a comfortable thing to confront, but so long as the white supremacy crowd has a monopoly on inconvenient facts that nobody will go near… well, they’re the ones who will benefit from those facts. So it’s in our best interest to acknowledge, confront, and most importantly change that behavior.

But what do I know? We’re just your fucking Asian neighbors. This statement was said by an African American neighbor who was being arrested for domestic violence the moment I stepped out on the porch. “Oh, are the fucking Asian neighbors coming out? Were you the ones who called the cops” This was said by someone who was only a victim of their own poor decisions that night. And yes, referring to my family that way is absolutely racist.

And, for the record, yes, I made the call while you were beating the shit out of your sister. Kisses.