Time for COL/Dr. Birx to Decide 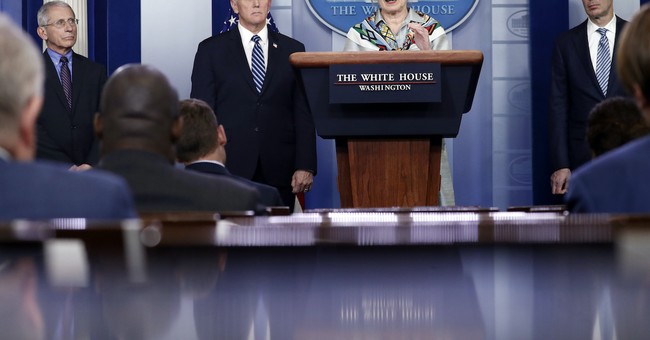 Army Colonel (Retired) and Medical Doctor Deborah Birx is undoubtedly an experienced military officer and physician. I’ve had a look at her publicly available military record and can make some (positive) assumptions regarding her medical capabilities. However, she needs to decide if she is going to remain a tenured bureaucrat continuing to run with that crowd, or uphold her oath to the Constitution.

As a fellow alumnus of the green machine (1976-2013), I am predisposed to give COL/Dr. Birx the benefit of the doubt over say, Dr. Fauci, who, from what I can see, has gotten it wrong on every “pandemic” he has ever been involved with…to include this one. Given his notable failures with AIDS, N1H1 and now the China Virus, I find it odd that he has the effrontery to claim he has “no truck with models”….so to speak…as he did during a one-on-one interview with Martha McCallum of Fox News a couple of days ago.

COL/Dr. Birx doesn’t need to follow Dr. Fauci’s lead. I expect much better out of her. I don’t believe she should allow herself to not only condone but actually serve as a front person in federal support for the open and notorious skewing of Wuhan Virus statistics, specifically “Cause of Death.” I understand the concept of “better safe than sorry.” But that can be taken too far..and has been.

I also understand something else; there is a huge difference between exercising judgment as to what should be put on the Death Certificate, ultimately ending up as part of the data set…and the outright falsification of inputs. The difference can result in providing political cover for unconstitutional restraints on civil liberties or as an excuse to garner future federal funding. In at least one instance, I saw COL/Dr. Birx flat out encourage providers and reporting institutions to put blatantly false information into the system…and thereby preclude effective decision making.

Our shared military experience allows me to give COL/Dr. Birx the benefit of the doubt, in that she might not have seen this as an ethical issue, merely a medical one…better safe than sorry. Fine. But, make no mistake about it. It is much more than that. Skewing this type of data makes it more difficult for the real decision-makers…and that’s not COL/Dr. Birx (or Dr. Fauci)…to make a sober, reasoned assessment as to when and how to get America back to work. Neither COL/Dr. Birx’s commission nor mine expired the day we got handed our DD214’s. I am sincerely hoping she will reflect on that and adjust the Wuhan Virus “Cause of Death” reporting standards accordingly.