What to Do with a Humanities Major

Classics major Jordan Monnin ’20 works as a project manager for his father’s welding company near Cincinnati, Ohio. For Monnin, it wasn’t easy finding his major. “Coming into college, I didn’t know what I wanted to do or where I was headed with a career or life path, so I just started shopping around classes and professors that I liked, hoping something would stick.” After trying history, psychology, and business, Monnin eventually chose a classics major. Classics majors study ancient Greek and Roman cultures and how they relate to our current world. After his decision, he says, “I began to have an actual interest in the subject matter, the history and culture, and the impact these things have on the modern world.”

Classics is an unconventional choice for project managers in the welding industry, but Monnin believes that his major has given him an advantage. “Studying history better prepares you to put things in a broader perspective,” he says. “The Latin language helps order your mind in an analytical, problem-solving way. In a job where I need to have problem-solving skills, people skills, and a lot of information retention, studying the classics prepared my mind and broadened my perspective to adapt to any situation.”

Rachael Menosky ’19 is currently an administrative assistant and researcher at the Heritage Foundation in Washington, D.C. Menosky was a double major in history and rhetoric. She says, “When I came to Hillsdale, I thought I would be double majoring in history and English in order to pursue a law degree.” It wasn’t long before she realized she did not want to study English, but rhetoric instead. “Rhetoric was the complex art of persuasion. It was the link that connected research and writing. So it became history and rhetoric.”

Menosky believes her majors greatly contributed to her candidacy. “I went into every interview loaded with two things,” she says. “I can research like a historian, and I can write like a rhetorician.” At Hillsdale she gained experience researching in a variety of classes as well as speech writing for competition. “Most importantly, I was able to do an honors rhetoric thesis with an emphasis on history and politics. I honestly think it’s these things that led me to my job.”

Her job performance has been impacted by her majors as well. The ability to multitask and balance deadlines that she picked up at Hillsdale has given her the ability to perform at a high level in such a fast-paced environment. “Funny enough, I know the girl who had the job before me, and she found it very hard to balance it all,” Menosky says. “But I even think I could potentially take on more. I just think that I was very ready for this.”

For Mary-Grace Alles ’19, her English major took her the more traditional route of teaching. She quickly fell in love with English. “The literature I read was what kept me up at night. Mulling over the characters and stories moved [me] in a way I’ve never been by anything else before,” she says. She believes that “literature communicates ideas, situations, or truths in the manner we encounter and struggle with them in real life: through experience, relationship…and narrative.”

Alles chose teaching during her job search and believes her major greatly impacted her ability to secure a position. She says English gave her “a solid grounding and belief in the importance of language and story for moral and intellectual growth. An essential aspect of a child’s education is empathy, imagination, [an] encounter with the world, and just about anything else. Many of the possible employers I met with were similarly concerned with that aspect of education.”

While it’s easy to get bogged down with the tall task of choosing a major, even those in the humanities have found that the values taught in classrooms of English, history, and Latin are influential in all aspects of their lives, even their professional careers. Humanities teach skills like analysis, the ability to think from others’ perspectives, and the ability to balance deadlines and projects, all of which are crucial in today’s workforce.

For more information on majors at Hillsdale, read this article about deciding on your field of study. 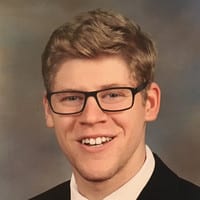 Paul Kearney, ’20, is a history major local to Hillsdale, MI. You can find him reading, listening to indie music, or preparing for his next road trip while he procrastinates on term papers.