Mary Greco ’22 came to Hillsdale for the same reason many students do—to study politics while receiving a liberal arts education. She has dreams of pursuing a career in political strategy, think tanks, or diplomacy.

After arriving at Hillsdale, Mary discovered that the politics major is more philosophical and theoretical than diplomacy-based. The international business major, while incorporating more of the “international” studies that she is interested in, also is more focused on business credits. Despite Hillsdale’s majors not offering exactly what became most important to her, she said the liberal arts curriculum was also invaluable to her.

“I really believe that I’m not going to get this education anywhere else,” Mary said. “We might complain about having to take science classes, but they explain so much. You understand the facts of what was going on through literature. The first scientists were philosophers, so all these things are really connected. They aren’t supposed to be separated.”

With the love of Hillsdale in mind, Mary decided she wanted to follow in the shoes of Elizabeth James ’19 who she heard had created her own major at Hillsdale called international relations. Mary decided to call her proposal for an interdisciplinary major international relations as well. While she used Elizabeth’s course template for inspiration, she was able to work with faculty, particularly her advisor Dr. Rahe, to tailor her major to her own specific needs.

“It’s hard to understand the politics or economics of a country if you don’t first understand their culture,” Mary said. This is why gaining knowledge of religion, history, and politics compose an ideal interdisciplinary basis for learning about other countries’ unique cultural components. Mary said acquiring languages is also important to her for these reasons. Therefore, her major will be an intersection of three disciplines: religion, history, and politics. She also plans on taking supplementary classes in economics, psychology, and sociology. Going on WHIP during the spring of her junior year will give her the opportunity to gain more practical experience through classes like Diplomacy and National Security.

During her first year at Hillsdale, Mary had the opportunity to study Greek for her bachelor of arts language requirement. She then decided she wanted to learn Russian, a language not currently offered at Hillsdale, because of her interest in Russia’s culture—the complex music, history, politics, and literature. It was a perfect fit, she says, because the Russian alphabet is based on the cyrillic alphabet, like Greek.

So, in the summer between her freshman and sophomore years, Mary embarked on an adventure. She attended one of the top language immersion programs in the world at Middlebury College in Vermont. There, she spent eight weeks speaking only Russian and making lifelong friends with the most motivated group of people she’s ever met.

“It was one of the best experiences of my life,” Mary said. “Everyone was there for one thing—to acquire this beautiful language.”

She said her first two weeks immersed in the language were the most difficult but the most rewarding.

Taking the initiative to propose her own major gave Mary the opportunity to study something she was passionate about, while still getting the benefits of a complementary liberal arts education. Proposing a major is on a case-by-case basis, is rare, and must be approved by the educational policies review board at the College. Jacob Umholtz ’21 is also doing the international relations major, which was approved along with Mary’s. While on WHIP, he said he would like to intern at the Department of Defense, the FBI, or the CIA.

Studying international relations will allow both Mary and Jacob to best pursue a career in the fields they are passionate about. As for Mary’s love of the Russian language, her dedication did not stop at the end of the summer. She still practices Russian often, and still receives phone calls from her friends from the program. 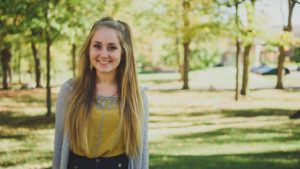 Crystal Schupbach, ’20, is a Michigan native studying psychology and journalism. A few of her favorite things include dogs, summertime concerts, and garage sales–in that order.