Wet Markets Aren’t the Problem, Regulations and Complacency Are

While there are questions about the original source of Covid-19, it has been widely assumed that it was spread to the public from a Chinese wet market. Although many have been quick to speak out against these markets in and of themselves, the reality is a bit less cut and dried as “keep or cancel”. In the culture of Southern China, it is a very common desire for food to be “fresh”; for meat to be warm and vegetables freshly plucked from the Earth.

Although the rest of the world has largely moved from the local wet market system, the retail overhaul which has been a boon for sanitary standards and quality of produce hasn’t held stride in China and several other Southeastern Asian nations. Walmarts sit near empty while these places remain bustling traffic centers, animals stacked in cages among one another, slaughtered on the same board for serving to eager customers.

Meanwhile, these issues don’t plague the West’s balanced new market system, in which farmer’s markets and wet markets both manage safe and healthy guidelines on top of providing quality competitive service. In fact, the two will often blur the line of definition depending on where in your state you might find yourself, with some animal products being available in the same markets as apples, pumpkins, and cabbages. There are liberal opportunities provided for new participants to enter these voluntary markets. Generally, you just need to be somewhat local and follow the established participatory rules.

Pike Place Fish Market in Seattle is a great example of what works.It’s even still working to serve people in this crisis, and maintaining healthy contact/service throughout. The Kansas City historic City Market was a bonafide firsthand experience in a choice variety of quality produce, all evenly spaced and without absolute pandemonium. Countless examples can be found across America and Europe of these private collectives making their system perfectly viable for the modern sanitary era.

The real issue behind all this is threefold: the matter of cultural difference, lacking competitive and safety standards, and the central governing power responsible for both.

The Chinese government had already been working to convince its people of the “benefits” of traditional Chinese homeopathic remedies and their capability of supplanting “Western” medicine.

This first major hurdle is key in understanding how the culture/society is built around the idea of nationalistic zeal in the traditional mindset. Likely meant to instill complacency, the CCP’s social engineering has added the hubris of pride to the mix, making it volatile. In a world where the more people there are moving about it, the more likely these diseases are to jump to humans. It’s hardly right to make it an easy task in the name of defending your grip of power.

Furthermore, the culture of China is much different in the home compared to that of the West, with many families being unable to afford the amenities needed to store food longterm, thus resulting in a desire and more importantly a need for that food to be fresh, or risk disease. Sadly, in these situations, the risk of getting disease might be even higher than buying Walmart meat. 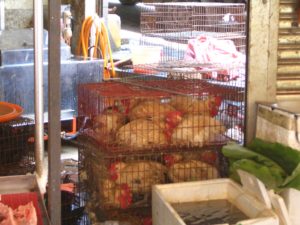 This grip of power might just well slip in the wake of the failed handling of this crisis, but failed handling also falls on the vendors themselves – not least of which can be proven just by the fact that these markets operated in such unsanitary conditions to begin with. Even if people prefer their dinner slaughtered brutally in front of them instead of behind closed doors in some industrial building in Iowa, there could at least be some soap and water involvement with the utensils before being used to end the food’s life – or at the very least some space between the animal cages.

These markets have likely existed for a long time as well, with their own “traditional standards” which amount to nepotism at best, and outright corruption at worst. Not to mention, with all of them possessing adequately enclosed supplies or otherwise being sold the same pre-slaughtered produce as the supermarkets, there is no incentive to generate meaningful competition. There is no public outcry over health concern. There is no consumer revolt. There isn’t even easy entry into the market. The game was rigged from the start.

Of course, these myriad mistakes that lay at the feet of the communist Chinese government will remain unsolved and sparingly mitigated, as the ouroboros constructed of red tape will continually work in self-service over the “greater good” in this scenario.

The complacency, the lack of understanding of health – these are all the result of the state when they are decided by it. The problem in this case has ultimately not been the system of service itself, but that the ones running the strings have engendered unsafe markets while actively executing a campaign to decry modern germ theory in favor of ancient pseudoscience.